An Arkansas Flag/Wabbaseka Memorial Dedication Ceremony has been set for October 12. 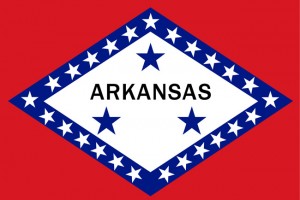 This historical event commemorates the 100th year anniversary of the official adoption of Arkansas’s flag. The first flag was revealed 100 years ago at the Arkansas State Fair in Hot Springs.

This month will mark the dedication of the Arkansas Flag/Wabbaseka Memorial site in Wabbaseka City Park, Wabbaseka.

The  ceremony, which is at 10 a.m. in Wabbaseka ( which is in Jefferson County), is in honor of Arkansas’s flag, Ms. Willie Kavanaugh Hocker (flag designer from Wabbaseka) and the Navy’s USS Arkansas, which served in both World Wars. Hocker, a Wabbaseka teacher and poet, designed the  flag to fly aboard the USS Arkansas, a newly commissioned Navy battleship in 1912.

Governor J. T. Robinson and the state Legislature made it the official state flag February 26, 1913. Hocker is one of only two women in the U.S. who have had state flag designs adopted. On February 26 of this year, Governor Mike Beebe presented a proclamation declaring Wabbaseka as the hometown of Willie K. Hocker and the Arkansas State Flag.

According to the Encyclopedia of Arkansas History & Culture: “Hocker’s design was a rectangular field of red, on which is placed a large white diamond, bordered by a wide band of blue—national colors. Across the diamond is the word ‘Arkansas’—placed there by request of the committee—and the blue stars, one above, two below the word. On the blue band are placed twenty-five white stars. The diamond signifies that Arkansas is the only state where diamonds are mined. The twenty-five white stars represent Arkansas’s place as the twenty-fifth state admitted to the Union. The three blue stars represent the three nations, France, Spain, and the United States, whose flags had flown over the state.”

A motorcade carrying the flag will precede the ceremony starting at 6 a.m. that day in Hot Springs and will travel through Little Rock and Pine Bluff before arriving in Wabbaseka for the ceremony. Author Jason Irby, a Wabbaseka native, and the Wabbaseka Memorial Committee will host the  event.

Wabbaseka City Park is at  Hwy 79 and Paw Paw street. For more information contact Jason Irby at 501-907-6710 or [email protected]