The Arkansas Arts Center Children’s Theatre has announced their 2017-2018 season lineup of six main stage shows, featuring everything from musicals to Mother Goose, with a few silly surprises thrown in for good measure. The theatre is one of the only ensemble children’s theatres in the country and one of a few continuously existing ensemble theatre companies in America, having been founded in 1979. With a resident playwright, composer, acting company, directors and a set designer—meaning most of what the theatre does is done in-house—the theatre has been recognized by The Drama League as one of the best regional theatre companies in America. Here’s a look at their upcoming season.

Doreen Cronin and Betsy Lewin, the bestselling writer and illustrator of Click, Clack, Moo: Cows That Type, are back with another adorable farmyard adventure – Giggle, Giggle, Quack. This time around Farmer Brown is off on a much-needed vacation, leaving his brother Bob in charge with one crucial word of advice: “Keep an eye on Duck. He’s trouble.” What could possibly go wrong?

Goosebumps the Musical: Phantom of the Auditorium
October 27 – November 12, 2017

Adapted from R. L. Stine’s Phantom of the Auditorium, this weird and wacky musical is sure to bring a tickle and a chill. Follow Zeke and Brooke and all the other young thespians of Woods Mill Middle School as they put on the best darn musical ever – even better than last year’s Guys and Dolls. But be prepared for a goose-bumpy ride from first auditions to opening night as things go mysteriously awry.

It is nearly Christmas time in the land of nursery rhymes, and all of Mother Goose’s little friends are doing their very best to be good. Mary, Mary is far from contrary; the Tweedles have put their differences aside; Wee Willie Winkie is in bed by eight; and Little Jack Horner is keeping his thumbs to himself – all in hope that Saint Nicholas soon will be there!

The Snowy Day and Other Stories by Ezra Jack Keats
February 2–18, 2018

What is more delightful than waking to find the world covered with fresh snow? What is more awesome than bundling up and trundling out into that white serenity to feel the crisp crunch-crunch-crunch underfoot and the brand-new-ness of creation all around? Come join little Peter as he explores these delights and many more in The Snowy Day and Other Stories by Ezra Jack Keats.

What a day for Junie B. Jones. Someone took her gorgeous new furry fur mittens, and they didn’t put them in the lost and found box! But then she found the coolest new pen of many colors. Finders keepers, losers weepers! Right? But wait. Does that mean finders keepers on her mittens too? And on top of all that, there’s a dreamy new boy – let’s call him Handsome Warren – in kindergarten. Can you “finder keeper” a boyfriend? Find out in this uproarious comedy by Allison Gregory based on the book series by Barbara Park.

One day, a lovable wanderer came upon a little house at the end of a long road. “Hello inside,” he called. “Is anyone home? I’m a hungry traveler who wants food to feed his tummy.” A little woman peeked out and smiled. Then she opened her door. Delighted, the traveler stepped inside to discover a treasure even more precious than a pot of delicious soup: he found a friend. Earnest charm, playful imagination, and heart-warming music are the key ingredients in this fresh, nourishing new play.

Showtimes are Fridays at 7 p.m. and Saturdays and Sundays at 2 p.m. Tickets are $12.50 for general admission and $10 for Arts Center members. During Spring Break, March 22-25, there will be daily matinees of Junie B. Jones Is Not a Crook at 2 p.m. “Pay what you can” tickets are available for the Thursday night preview performance of each show; these must be purchased in person in the Atrium Level Visitors Center from 10 a.m. to 5 p.m. or just before the show at the box office from 6 to 6:45 p.m. Season ticket and flex-pass packages are also available.

Featured Article
Epic Adventures are Waiting for You
Watch the Video 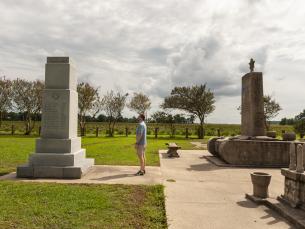