Former President Bill Clinton will deliver remarks at the 50th anniversary of the Greers Ferry Dam Dedication set for 11:30 a.m. on Oct. 3 at the John F. Kennedy Overlook in Heber Springs. 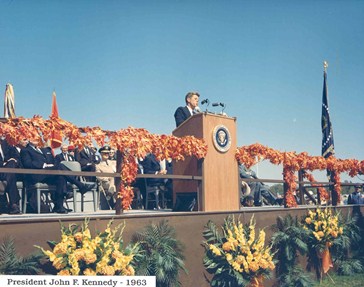 The Army Corps of Engineers Greers Ferry Project Office is celebrating the anniversary of the dedication, made Oct. 3, 1963 by President John F. Kennedy. It was one of his last public appearances before his assassination on Nov. 22, 1963.

At the original event, Kennedy said, “I know that 10 years from now, if we come back again, flying as we did over the land that we will see an even richer State, and I think you can take pride and satisfaction in what you have done.”

The benefits of the dam have, in fact, been substantial. It has provided flood control, recreation, power generation and water supply for those in the valley of the Little Red River. This resources’ annual value to the region is $1 million in flood damage prevention, $8 million in electricity revenue, seven million visitors to Greers Ferry Lake, and a boom in tourism revenue to the area.

Nestled in the Ozark foothills between Clinton and Heber Springs, Greers Ferry is among the state’s five largest lakes. It is also tops in providing great fishing, water sports, boating and camping. The award-winning reservoir serves as the national model for environmental cleanliness. Corps of Engineers campgrounds and commercial parks are available, along with first-class lodging, lakeside resorts and fine restaurants. Shopping and historical sites are other attractions around the lake.

The Corps began construction in March of 1959. It took hundreds of workers and $46.5 million to build Greers Ferry Dam.

Clinton will give his remarks from the same podium used by Kennedy in the original dedication. Other speakers for the anniversary event include Arkansas Gov. Mike Beebe and Army Corps of Engineers Southwestern Division Commander Brig. Gen. Thomas Kula. Just as it did 50 years ago, The 106th Army Band will perform.

The event is free and the public is encouraged to come early to view more than 25 exhibits, many of which showcase the history of Greers Ferry Dam and Lake. Park gates open at 9:30 a.m. The ceremony is planned to last one hour. The overlook is located just north of the dam.

Seating is limited so those attending should bring a lawn chair if possible. The Heber Springs Fire Department will shuttle anyone needing assistance from the parking area to the seating area. Additional parking is available at Dam Site Park Day Use Area with shuttle service provided to the ceremony site beginning at 9:30 a.m. Southwestern Entergy will provide free bottled water.