Documentary In the Works About Hot Springs’ Role in Baseball History

Emmy Award winning documentary filmmaker Larry Foley announced at a news conference today at the Hot Springs Convention Center that a documentary on Hot Springs’ role as the birthplace of spring baseball is being produced for release in 2015.

The film, “The First Boys of Spring,” will be about the city’s role in the history of Major League Baseball (MLB) in the late 19th and early 20th centuries. Foley is known as a master storyteller and an accomplished documentary filmmaker. He is also a broadcast journalism professor at the University of Arkansas. His productions have earned five Emmys from the National Academy of Television Arts and Sciences. His PBS credits include The Buffalo Flows (Mid America Emmy-Writer), Saving the Eagles, The Lost Squadron and When Lightning Struck: Saga of an American Warplane (Mid-America Emmy-Cultural Documentary). His work has also been nationally broadcast on ABC, CBS and ESPN.

A trailer for the documentary was shown at the news conference.

Hot Springs is a hot spot for baseball history. So much so that in Spring 2012, coinciding with MLB spring training, the city opened The Historical Baseball Trail that documents Hot Springs: The Birthplace of Spring Baseball.

The city opened the trail during a ribbon cutting ceremony at Whittington Park .The site has a special connection to baseball history because in 1918 Babe Ruth hit the first 500-foot-plus home run while playing a spring exhibition game at the park. The ball traveled 573 feet and landed in an alligator pit at the nearby Arkansas Alligator Farm. 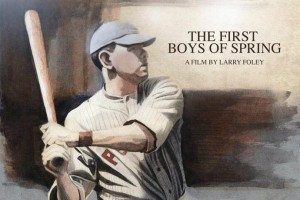 The trail, which includes a series of 28 historical markers throughout the city, was the result of meticulous research by baseball historians and the project was led by Steve Arrison of Visit Hot Springs.

The city was also home territory to several minor league teams including the Hot Springs Bathers. For those who might want to learn more, a book has been written about this part of Hot Springs history: Bathers Baseball: A History of Minor League Baseball at the Arkansas Spa.

There is a neat photo exhibit inside the Hot Springs CVB that also highlights the city’s baseball ties.  According to the exhibit, from 1886 to the early 1940s, Hot Springs attracted many of baseball’s best teams. In 1886, Hall-of-Famer Cap Anson was the manager and first baseman of the Chicago White Stockings ( now the Chicago Cubs).  Anson had heard about the city’s mineral waters and spas and brought the team there so they could, “boil out the alcoholic microbes’ in his hard-living players. The players trained by soaking in the spas, playing baseball, and hiking the mountains.  The team won the pennant that year and more teams joined them in heading to the city after that.

A regular patron to the city was Babe Ruth. He started coming for spring training in 1915 with the Red Sox. According to The Life & Times of Babe Ruth by Leigh Montville, “The big man worked in spurts. He would play 54 holes of golf, run three miles back to the Hotel Majestic, sweat through a hot mineral bath, weigh himself, and announce to the nearby world that he had lost seven pounds. Then he would be stiff and sore for the next three days, eat well, and put the weight back onto his aching body. Maybe even add weight.”

Other legendary players who passed through the city for training included Dizzy Dean, Honus Wagner ( aka “The Flying Dutchman”), and Cy Young. 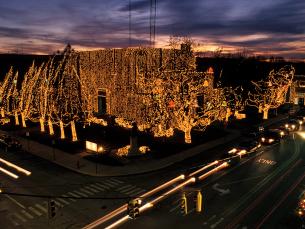