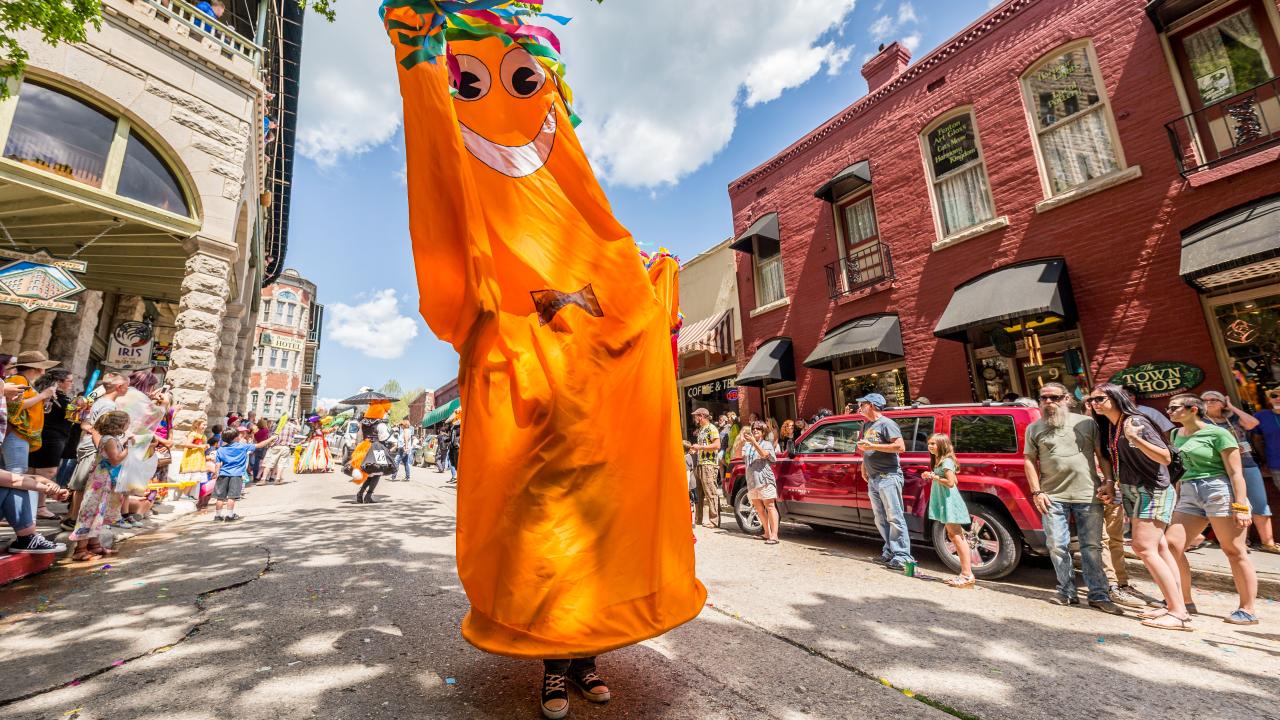 Eureka Springs is a charming, extraordinary escape where Victorian architecture, unique boutiques, and quaint accommodations are all nestled into the Ozark Mountains. The town is known for its southern hospitality and as the host of more than 100 parades, music festivals, and fun events every season. For those hoping to experience all that Eureka Springs has to offer this year, here’s a list of the most popular events each month:

January gets things underway celebrating Mardi Gras Eureka-style with Eureka Gras — the largest of its kind in Arkansas! Each year, residents and businesses come together to celebrate, drawing revelers from all over. Events stretch into March with costume balls, two parades, Cajun food, coffee and beignets, umbrella decorating and much, much more. 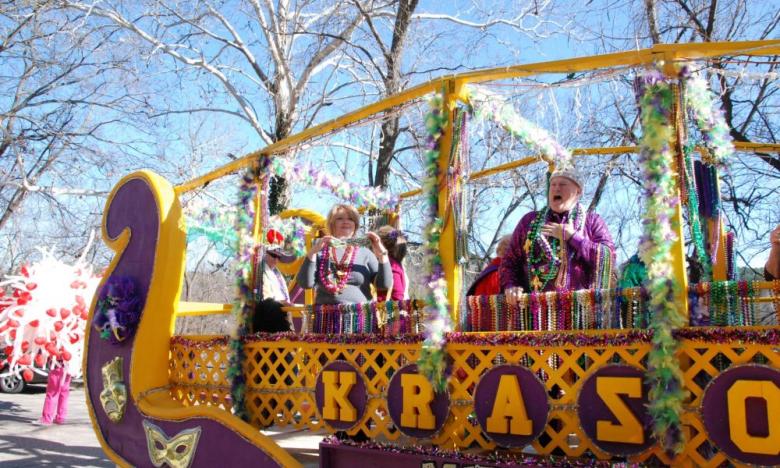 Dress in green from head to toe and take in the St. Patrick’s Day Parade in March — you can even bring your kazoo and march with the Eureka Springs All-Star Kazoo and Free Form Marching Band! Or go fly a kite at Turpentine Creek Wildlife Refuge’s annual kite festival.

April starts with one of three Diversity Weekends for the year. These show off Eureka Springs as the “Gay Capital of Arkansas.” There are also monthly events that get underway in April including the Second Saturday Gallery Stroll, Basin Park concerts and Drumming in the Park. See amazing carvings made with chain saws at Carving in the Ozarks. 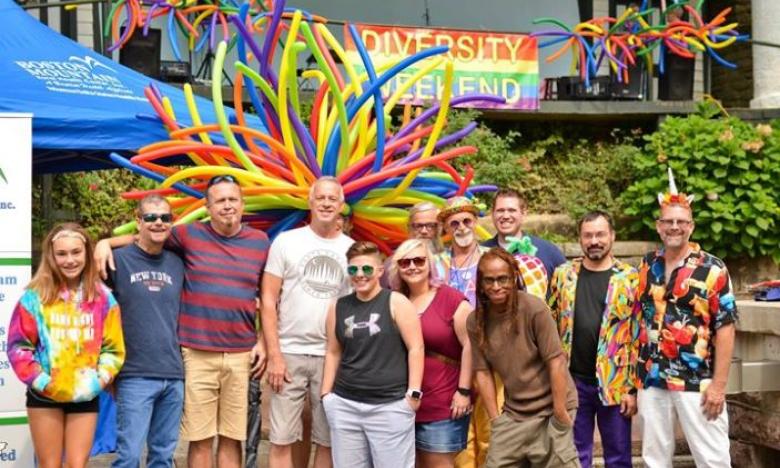 Diversity Weekend in Eureka Springs - the "Gay Capital of Arkansas" 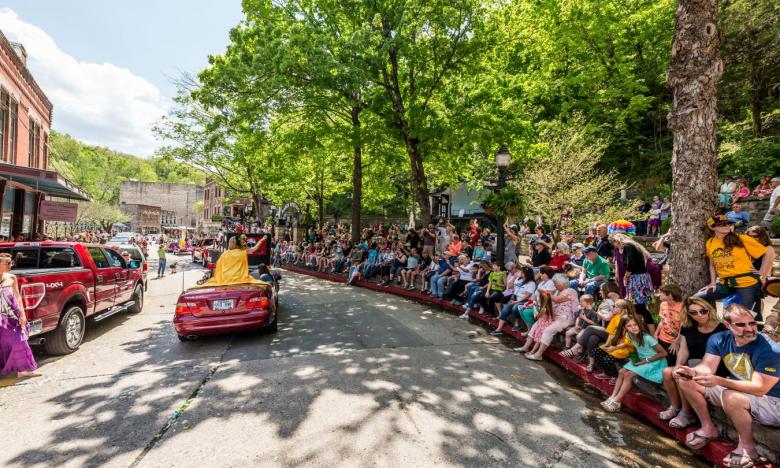 May devotes all 31 days to the arts community to show off some of the 350 working artists calling Eureka Springs home. The May Festival of the Arts is packed with one-of-a-kind art exhibits, demonstrations, performances, culinary arts, free music in the park, the ArtRageous parade and the wildest street party thrown by artists – The White Street Walk.

June begins with Rhythm & Blues Weekend and kicks off the month-long Opera in the Ozarks at Inspiration Point. This training program for singers interested in pursuing an opera career performs some of the very best operas like La Bohème and The Abduction from the Seraglio. 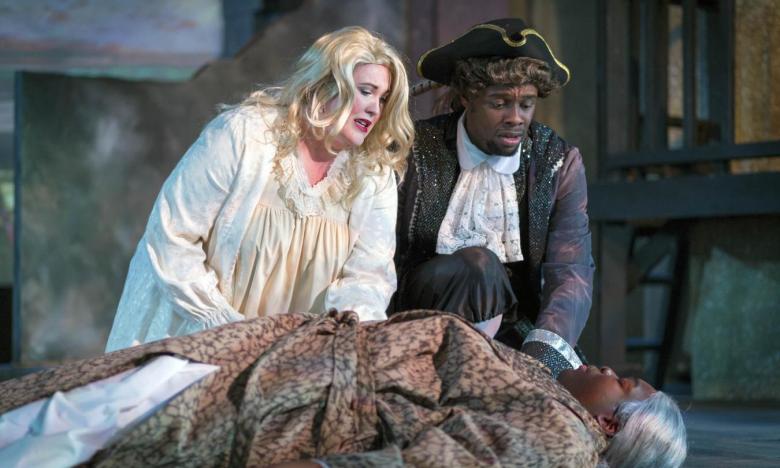 Opera in the Ozarks at Inspiration Point

Celebrate the 4th Fourth of July with yet another parade. This summer month also brings bikes to town with the Fat Tire Festival at Lake Leatherwood City Park. The Eurekan Multisport Festival in mid-July tests athletes with a triathlon, challenges and Gran Fondos. For a musical summer weekend, the Spaceberry Music Festival brings a rock and fireworks to The Farm.

August heats up with Bluegrass Eureka featuring free bluegrass music in Basin Spring Park as well as the annual Volkswagen Weekend which has spread out to three locations around town — of course this also includes a parade!

In September, there’s yet another car show and parade with the 49th annual Antique Auto Festival and the Great Bank Robbery Reenactment, in which five bank robbers attempt to rob the citizens of the town.

Eureka Springs is known as Halloween City in the month of October, which includes Voices from the Silent City Cemetery Tour, Intrigue Theater’s Halloween Show and Turpentine Creek’s Howl-O-Ween Spooktacular. On the last weekend of the month, Spring Street is taken over by a hoard of zombies during the annual Zombie Crawl. The fall foliage is also at its peak at the end of October, so this is a favorite time of year for leaf peepers too! 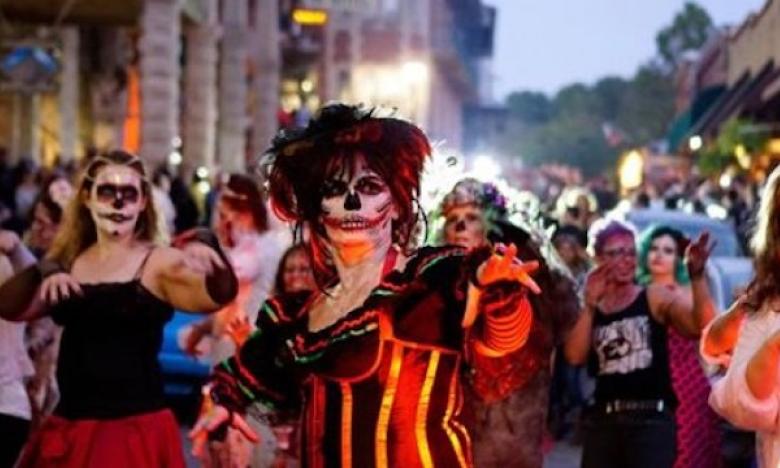 November welcomes the longest running folk festival in the United States. The 72nd annual Original Ozark Folk Festival features free folk music in the park, craft fairs, The Barefoot Ball and more! Several days of events are planned to honor our veterans as well, including the Veterans Day Parade. Plus, holiday events begin to get underway at the end of the month.

Eureka Springs decks the halls in December with colorful lights ablaze throughout the historic district. Residents share the warmth of a small-town Christmas with visitors through the many holiday events and activities including Santa in the Park, light displays, Tour of Homes, many holiday concerts and yes, another parade!

This is just the tip of the iceberg for what’s going on in Eureka Springs this year! Visit the website at www.eurekasprings.org for a full events calendar! 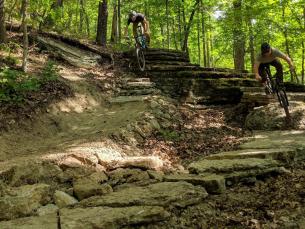 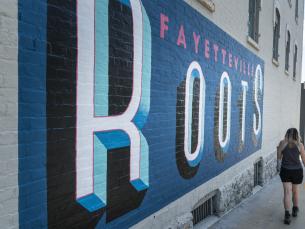 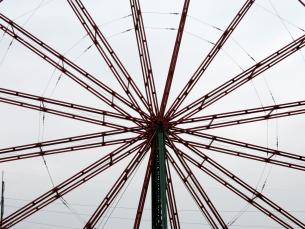