One of my favorite ways to enjoy the beauty of fall color in Arkansas is by rail, where you can let the Arkansas and Missouri Railroad do the driving while you do the gazing.

Ride in style on the meticulously restored antique passenger cars, ranging from the 1920s to the 1950s, while conductors enhance the journey with anecdotes about the area’s rich history. From your window seat you can view of orange, gold and red hues of the fall season as the train travels to the top of the scenic Boston Mountains and into the historic Arkansas River Basin. Round trip tickets include travel from Springdale to Van Buren, and from Van Buren to Winslow.

Beginning in October, regular fall foliage excursions are offered Wednesdays, Fridays and Saturdays. In Arkansas, the seasons begins changing in late September to early October. Typically, peak color occurs two to three weeks later.  Be sure to check the excursion train calendar because additional excursions are often added during October. 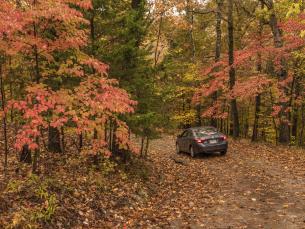 The Best Fall Drives in the Ozarks 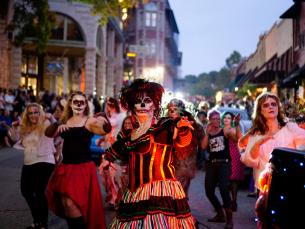