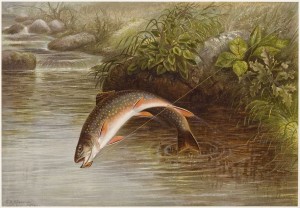 It is a collection of the most admired 19th-century color lithography and explores the story of American printmaking as well as distinctly American fish in their national surroundings. The color plates capture a number of distinctly American fish in their natural surroundings, including the striped bass, sheepshead, bluefish, weakfish, red snapper, pompano, and brook trout. Each fish’s shimmering colors and delicate scales are amazingly vivid.

“Game Fishes of the United States,” one of the largest and most spectacular of American sporting books, was printed in 1879 -1880 at the zenith of late 19th-century American chromolithography. The work, which is included in the Crystal Bridges Library collection, features 20 color plates based on the original watercolor paintings by well-known sporting artist Samuel Kilbourne, with text written by ichthyologist George Brown Goode, head of the fish research programs of the US Fish Commission and the Smithsonian.

The collection conveys the drama of sport fishing and highlights the exploration and celebration of nature in American art—one of the major themes in Crystal Bridges’ permanent collection.

Many of the fish in the exhibit can be found in nearby rivers and lakes. So put your fishing gear in your car before you head to the museum because you’ll likely be inspired to go fishing.

The exhibit runs April 4 through Sept. 21. In addition to viewing the color prints, visitors are encouraged to share their fish stories or personal memories with an interactive exhibition, The One that Got Away; visit the Museum Library with more than 50,000 volumes of art reference material; or participate in one of the many programs tied to the exhibit:

June 28: CR(EAT)E Food Series » Brews and Fish of the Ozarks