I try to go out with Bill Dennis of Central Arkansas Fishing Guide Services once a year.  He knows fish, he knows the Arkansas River, and he’s darn pleasant to fish with.

A few weeks ago we headed out on Lake Dardanelle, an impoundment of the Arkansas River. It stretches some 50 miles through the Arkansas River Valley and has more than 34,000 acres of boating and fishing waters. It’s also one of the most popular lakes in Arkansas for fishing tournaments because of large populations of catfish, white and largemouth bass, bream and crappie.

From the boat ramp at Lake Dardanelle State Park in Russellville we headed toward Russellville Bay and later to Dardanelle Bay. You just can’t beat running 55 mph in a bass boat on a sunny spring day. 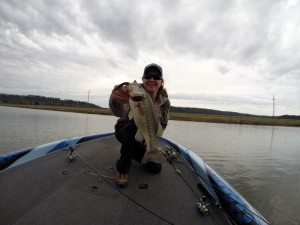 We started by fishing the back end of a creek where the water would be cleaner and warmer. I dragged a swim jig on 20-pound braid through grass beds. We also fished near drop-offs, points and then some flats. We continued that pattern on the backs of creeks, then went to a wood pattern. Bill caught a few on the wood structure, before we went back to creeks and grass. I tried a rattletrap for a bit, but to no good.  Bill said he was sure somebody was catching them with rattletraps on the lake because bass are usually active on those in the spring. I’m sure it had nothing to do with me and my fishing skills.

The sinko is what finally got one for me. I guess I’m more of a finesse bait kind of girl, or at least I was that day.

Fishing on Lake Dardanelle is very productive and with mild winters, fishing is good year round. The lake has one of the most consistent bass habitats in the Arkansas River system. Lake Dardanelle at Russellville toward the upper end of the river is known for big largemouth. It’s no wonder Lake Dardanelle is host to numerous national bass tournaments. It’s also why the state park there has a fabulous tournament facility.

Locks and dams along the Arkansas River allow access to this and other great fishing pools stocked with sport fish by the Arkansas Game & Fish Commission.

Bill added that the Arkansas River offers a lot of variety in regard to different scenery too. He said a nice trip is to put in at Maumelle Park and fish the stretch to Mayflower because there is state park property to see, a lot of beautiful homes along the banks and great fishing. Urban fishing is a possibility too. He picks folks up in the middle of downtown Little Rock either at their hotel or on the river right behind some of the hotels.

In addition to the Arkansas River, Bill offers fishing trips on the White River, Lake Ouachita, Lake Maumelle and Greers Ferry Lake. For more information, visit his website  www.arfishingguide.com, email him at [email protected] or call 501-580-0669.

And if you happen to be interested in getting in on some tournament fun, the Arkansas Big Bass Bonanza is June 27-June 29. It’s Arkansas’s largest amateur big bass tournament spanning the entire length of the Arkansas River. More than $100,000 will be distributed to winning anglers. The biggest bass of the entire tournament is worth $50,000. On-line registration closes at midnight, June 25, but anglers can still enter before fishing at each weigh-in site the day of the tournament. Visit www.arkansasbigbass.com for more details. 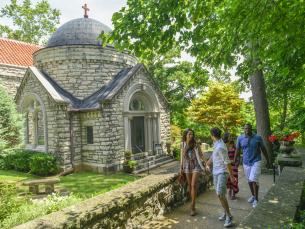