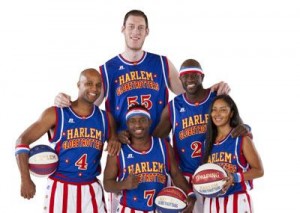 Editor’s note: The event featured in this article occurred in 2013, but you’ll find other great happenings on our Events page.

The Harlem Globetrotters are heading to Arkansas! It’s unlikely you have never heard their name before, but if not, the Globetrotters are a basketball team that travels the world performing amazing tricks on the court and airborne feats that can even outdo the pros.  The team has entertained millions of people over the years with a combination of comic routines and acrobatic basketball skills.

There will be many chances to catch the entertaining airborne feats of this basketball team. The team plays February 3 in Texarkana at the Four State Fair and Entertainment Center.  On Feb. 4 they play at the Convocation Center in Jonesboro at 7 p.m. Then they will be in North Little Rock on Feb. 5 at Simmons Bank Arena. After the games, Globetrotter stars remain on court for autographs and photographs with fans.

The games are part of the North American leg of the 2013 World Tour. During the tour, the team will play over 270 games in nearly 240 cities in 45 states and nine Canadian provinces. That’s a lot of games!

New this year is a chance for fans to call the shots ( their show this year is called “You Write The Rules”).  Fans decide the new rule they want to add to Globetrotters basketball when the team comes to their town-a rule that could affect the outcome of the game. Check out the team’s facebook page for more details: facebook.com/HarlemGlobetrotters

Arkansas has many ties to the Harlem Globetrotters, including many of the most well known players that have played for the organization.  For instance, Hubert ‘Geese’ Ausbie played college basketball at Philander Smith College in Little Rock.  He turned down a pro career to play with the Globetrotters. He was one of the most popular and recognizable Harlem Globetrotters ever, and  played for the team for 24 years. If you would believe there is another ‘Goose’ with Arkansas ties: Reece “Goose” Tatum.  (Ausbie’s nickname, which he had had since childhood,  was changed to “Geese” due to this fact. ) Goose Tatum was born in El Dorado. The original “Clown Prince of Basketball,” Harlem Globetrotters legend Tatum is among a distinguished list of 10 players and coaches inducted into the Naismith Memorial Basketball Hall of Fame’s Class of 2011.

For more details on the games in Arkansas, check out: