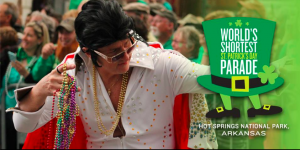 The First Ever 14th Annual World’s Shortest St. Patrick’s Day Parade takes place March 17 in Hot Springs. The parade is held each year on the famous 98-foot-long Bridge Street, which is known as the world’s shortest street in everyday use. Media outlet Irish Central recently listed Hot Springs as among the top 10 spots in the world to celebrate St. Patrick’s Day. Alfonso Ribeiro, who many might be familiar with as playing the role of Carlton in the 1990s series Fresh Prince of Bel-Air, will be this year’s Celebrity Grand Marshal. The Official Starter will be pro wrestler Ric Flair. Flair, known as The Nature Boy, is a 16-time World Heavyweight Champion and has been one of the sport’s biggest stars since the 1970s. His flamboyant showmanship is well known in the wrestling realm and he even trademarked his popular phrase “WOOOOO!” 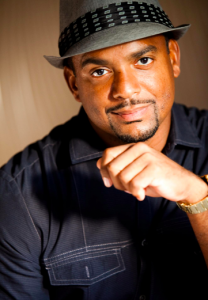 This year also marks the debut of the Express Black Clydesdales to the parade. The crew of powerful draft horses have been in many parades across the nation including the Macy’s Thanksgiving Day Parade. The team also escorted Prince William and Kate, the Duke and Duchess of Cambridge, during a visit to Canada. Six clydesdales from the team are coming to the parade.

Also at the parade will be Irish Elvis impersonators, Irish wolfhounds, marching bands, belly dancers, the Dallas Cowboys Cheerleaders, a Parade King and Queen, and many festive floats. Uncle Kracker is also scheduled to put on a free concert after the parade. The official measuring of the parade route takes place at 6:25 p.m. with the parade starting at 6:30 p.m. The free concert afterwards starts at 7:30 p.m. Previous Celebrity Grand Marshals over the years have included Kevin Bacon, Bo Derek, John Corbett, Jim Belushi, Mario Lopez, and others.

On a side note, Jen Schalow, who owns Craft Beer Cellar Hot Springs, said they are also having their First Annual St. Patrick’s Day Beerfest that day at 4 p.m. downtown in the Craft Beer Cellar parking lot at 120 Ouachita Avenue. There will be Irish food, music, beer stations and more on site at the event that day. The event is within feet of the parade route that day so patrons can have a direct view of it.