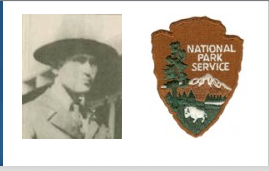 “Ranger Carey, like many rangers today, served our nation in many capacities, first in the U.S. Navy during World War I and later in law enforcement in the National Park Service,” said Hot Springs National Park Superintendent Josie Fernandez via a news release. “In keeping with his life of service and sacrifice, we felt that Memorial Day would be a fitting time to pay tribute to his legacy.”

Hot Springs National Park was first protected when Congress declared the area a reservation in 1832, around 40 years before Yellowstone landed the title as the nation’s first national park in 1872. The reservation was designated a national park in 1921 and is now known as the oldest protected area in the system. The park’s namesake attractions are the reason the park was first set aside for protection. The 47 protected springs, whose water is a piping 143 degrees (F), were the first and continue to be the only federally controlled hot springs in the nation that are managed for both public health and consumptive use.