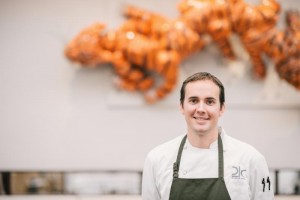 The prestigious group of semi-finalists is selected from a list of more than 20,000 online entries. There are 21 categories representing a wide range of culinary talent from exceptional chefs and dining destinations in 10 different regions across the U.S. to the nation’s top wine and spirits professionals, best new restaurants, rising star chefs, pastry chefs and bakers.

McClure is nominated in the category Best Chef: South. McClure is executive chef at The Hive in Bentonville. He was born and raised in Little Rock, Arkansas, where hunting, fishing and his grandmother’s cooking ignited his passion for food, according to his bio on The Hive website. After studying at the New England Culinary Institute in Vermont, he settled in Boston working at a number of restaurants including Troquet, Harvest and No. 9 Park under the direction of Barbara Lynch.

After years in Boston, McClure was eager to get back to his home state to reconnect with the ingredients and food ways of his childhood. He returned to Little Rock where he worked under Lee Richardson at Ashley’s at the Capital Hotel. In 2012, he was selected to open The Hive located at 21c Museum Hotel. His menu offers a contemporary take on the ingredients and ways of cooking that are familiar to the region such as pickling and preserving, making jam and sourcing whole animals whenever possible. He was also a semifinalist for the 2014 and 2015 James Beard Foundation Best Chef: South award.

The Foundation will announce the final nominees for all award categories on Tuesday, March 15 at a press conference in San Francisco, Calif., and via the JBF Twitter feed at twitter.com/beardfoundation.

The James Beard Awards Gala takes place on Monday, May 2 at the Lyric Opera of Chicago.