Editor’s note: The event featured in this article occurred in 2017, but you’ll find other great happenings for the current year on our Events page.

Five years and 3 million visitors later, Crystal Bridges Museum of American Art in Bentonville is set to impress again with a new entrance, elevator tower, and a pedestrian bridge on the north side of the museum, designed to increase access to the museum’s north lawn and trail system. This new entrance will open the public in June, and will connect visitors to the newly enhanced north forest in time for the Chihuly: In the Gallery and In the Forest exhibition. 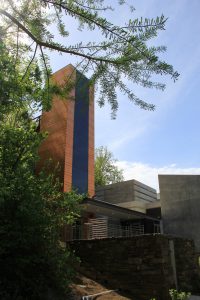 The new elevator tower designed by architect Moshe Safdie, who also designed Crystal Bridges, climbs 67 feet and will allow visitors easy access to both the north lawn and the North Forest Trail. Inside the museum, the elevator opens onto the east end of the Twentieth-Century Gallery Bridge, creating a third public entrance to the museum. The space will serve as a north lobby with a guest services desk, storage lockers, and other amenities. At the top level, visitors will cross a 100-foot elevated bridge to reach the North Forest Trail, which has recently been widened and paved. The bridge also provides new, vistas of the museum campus.

Moshe Safdie and Associates designed the tower, integrating the structure into the existing museum architecture through the use of glass and copper. Local architects Hight-Jackson and Associates, who assisted in the construction of the Frank Lloyd Wright house on the museum grounds, were involved in the process, as well as CEI Engineering Associates, Inc. and Tatum-Smith Engineers, Inc, and Flintco, general contractor.

The opening of the upcoming temporary exhibition Chihuly: In the Gallery and In the Forest will serve as the grand re-opening of Crystal Bridges’ North Forest Trail, formerly known as the Dogwood Trail. A year in the making, this paved trail increases accessibility of the museum’s natural landscape, especially for visitors using wheelchairs, strollers, or mobility scooters. Although there are some areas of gentle incline, the path has been engineered to soften any steep grades, which means that visitors with mobility challenges will be able to experience this area for the first time.

The 1.1-mile-long trail is 10 feet wide, designed in a figure eight, and includes public restrooms, and lights at night. The first loop will feature Chihuly art installations, and the second loop will be walkable, but will have no artwork installed until after the Chihuly exhibition. After the close of the Chihuly, the museum’s North Forest Trail will re-open for public access and will re-connect to the Razorback Regional Greenway trail system.

Work on the north forest has been in progress for more than a year in anticipation of the Chihuly :In the Forest exhibition. Designers took care to minimize the impact on the woods and wherever possible, routing the trail through areas containing already dead or damaged trees.  Removal of these trees not only made way for the new pathway, but also promotes a healthier forest.

The new trail cuts through a section of relatively young forest, which has reclaimed former farmland over the past 50-70 years, resulting in overcrowding of fast-growing trees. There are now nearly 500 species of plants on the museum property, which is double the number of species on-site when the museum opened in 2011. Crystal Bridges plants new native species of trees, woody shrubs, perennials, and ephemeral plants each year, but up to now those efforts have primarily been focused on the south side of the property. To diversify the north forest, native woodland plants such as Goat’s Beard (Aruncus ‘Misty Lace’), Bottlebrush Buckeye (Aesculus pariflora), and Pawpaw (Asimina triloba) are being planted along the North Forest Trail, and will make their debut with the opening of the Chihuly exhibition. 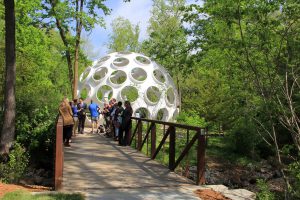 At the base of the ravine adjacent to the north forest, the museum’s north lawn is the largest green space on the grounds. Previously, it was accessible only by two sets of long, steep stairs. The new elevator tower, constructed to handle bicycles and wheelchairs, makes it easy for visitors to interact with the space. There’s more than green space to interact with since the Fly’s Eye Dome is currently being installed there.

While most of the dome structure is in place and can be viewed from the gallery, the north lawn will remain closed until July for the installation of landscaping, lighting, and interpretation panels.

Designed by architect, engineer, and visionary, Buckminster Fuller, the dome is 50 feet in diameter, and the largest of three original prototypes designed by Fuller as a response to global housing needs. The others measured 24 feet and 12 feet in diameter.  Designed in 1980, our Fly’s Eye Dome was first displayed at the Los Angeles Bicentennial in 1981, and spent the next three decades in storage. In early 2013, the dome was acquired by Robert Rubin, an architectural curator and historian, who restored it. After being briefly on view at the Festival International d’Art in Toulouse, France, in the summer of 2013, it has now it has found its permanent home at Crystal Bridges.

Along with the acquisition of the Fly’s Eye Dome, Crystal Bridges has also acquired Buckminster Fuller’s complete archive of the dome’s development and production, which is currently being cataloged into the museum’s growing archive. A focus exhibition of letters, photos, and manuscripts from this archive will be on view in the lower north gallery in conjunction with the opening of the Fly’s Eye Dome in July. 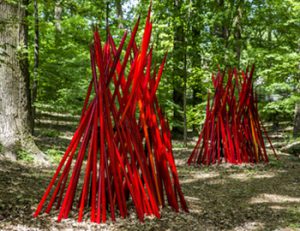 This summer, Crystal Bridges will open dual exhibitions by the American sculptor Dale Chihuly. Presented for the first time in an Ozark woods and in the Museum’s special exhibition galleries, it’s a world of wonder, waiting to be explored, only at Crystal Bridges.

Chihuly has been an innovator for more than 40 years, working in many media including glass, paint, plastics, neon, and ice, and always pushing their boundaries to carry out his distinctive vision.

He is globally renowned for his ambitious site-specific installations in public spaces, as well as exhibitions presented in museums and gardens. At Crystal Bridges, extensive indoor and outdoor installations feature new works by the artist, as well as iconic works spanning the breadth of his career. Tickets now on sale here. Ticket price: $20 In the Gallery and In the Forest; $10 In the Forest once the gallery portion closes. [Free for Members and youth ages 18 and younger.] A special Members-only previews will take place May 27 – June 2, 2017. The gallery and forest exhibit is open June 3 through Aug. 14. The forest exhibit will remain open Aug. 16 through Nov. 13.

Every Saturday Night from June 3 through August 12 from 6 p.m. to 10 p.m., spend your summer evenings outdoors enjoying the music series, Chihuly Saturday Nights. Explore the stunning exhibition Chihuly: In the Forest, transformed into a magical woodland amplified with live music, circus acts, artist demonstrations, artmaking, outdoor games, a brand new Eleven food truck, and more. $15 (Free for members, youth ages 18 and under, and for guests with tickets to Chihuly: In the Gallery and In the Forest on the day of the event.)