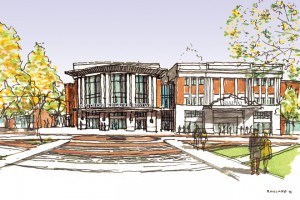 El Dorado Festival and Events, Inc. (EFEI) has a plan in place for a new entertainment district in El Dorado. The district will foster the culture of Southern arts in town and will be an addition to an expanding art scene in Arkansas. The plan will ultimately result in more than 250 performances a year at more than 35 events in town. The project includes collaborations with the Southern Arkansas Symphony Orchestra (the longest continually running orchestra in the state) and the Southern Arkansas Arts Center (SAAC) and the renovation of the 1929 Rialto Theatre into The Southern Theatre Festival. So far the project, which is slated to cost $50 million, has garnered funds from the Murphy Foundation ($5 million)  and the city council ($9 million).

We caught up with Austin Barrow, President of EFEI to ask him some questions about the project.

Arkansas.com: I heard that EFEI will collaborate with the Southern Arkansas Symphony Orchestra and the SAAC in the project. In what ways will they be involved? What types of programming is being discussed?

Barrow: EFEI is currently partnering on two projects with SAAC (Arkansas Association of Community Theatre’s Festival Feb. 1 and 2 and a production scheduled for September) and one with SASO (Romeo & Juliet Orchestral Concert March 30th).  With an arts and culture focus, EFEI thought it would be a great match to work with the long running existing arts organizations not only on scheduling of events but on a collaborative level.  We are all hoping that this relationship will continue to grow each program and increase the quality of each production.

Barrow: EFEI is currently working with an architecture firm out of Little Rock on the renovation schedule for the Rialto. This is a $25 million dollar construction project with a current anticipated start date of January 2014. We will be working over the next year on the design of the new structure and renovation of El Dorado’s crown jewel, The Rialto. We are anticipating a season opener for the Southern Theatre Festival the summer of 2015.  Given the size and scope of this project we believe that to be an achievable date, however the restoration of the Rialto is a high priority and we want to ensure a quality facility is ready for our opening season.

Arkansas.com: The total cost of the project is $50 million–besides the funds from Murphy Foundation and city council, where is the rest of the money coming from to complete the project?

Barrow: We are currently working on grants from several regional and national foundations.  Additionally, we will be talking to some potential corporations about donating to the project.

Arkansas.com: How long do you anticipate the whole project taking?

Barrow: We are hoping to have the entire project complete by the summer of 2015.  Several elements will be completed prior to that date and accessible to the public.

Arkansas.com: What are your thoughts on the response so far for the plans for the new entertainment district?

Barrow: The city council’s approval of $9 million is a great way to start our funding drive. For a city of any size to see the benefit of arts programming and to allocate such a sizable amount is simple outstanding. In addition, the Murphy Foundation gift adds credence to the achievability of our business plan. EFEI has a $50 million funding goal and have already achieved $14 million within a month of our announcement. Needless to say we are excited about the response thus far.

Arkansas.com:  Is there anything else you’d like to add about the project that I didn’t ask by chance?

Barrow: EFEI is planning several events during the 2013 season with opportunities for individuals to take part in this historical restoration.  Everyone in the region that has visited the Rialto will have an opportunity to help in bringing her back to her glory.