The moment we’ve all been waiting for is almost here: the grand reopening of the historic Robinson Center after a two-year, $70-million renovation (affectionately dubbed its “Second Act”). The celebration kicks off Nov. 10 with a press conference and ribbon-cutting; following that is a flurry of music, dance and theatre programs that will showcase all of Robinson’s many new features. If you, like many people, have been following along for the last 16 months, you’re probably familiar with the renovation’s bullet points, among them a new grand ballroom and terrace overlooking the Arkansas River; improvements to the performance hall, including enhanced acoustics and increased technical capacity; and a back-of-house reorganization—all wrapped up in a LEED-certified package that maintains the historical significance of the original building.

But what does all this mean? What will patrons actually see and experience inside the new Center? We were lucky enough to get a sneak peak during a hardhat tour about a month prior to opening day, and even through the dust and plastic and unfinished walls it was clear that the new Center will be a stunner. For those planning a visit, here’s a rundown of what to focus on, and why.

Things you will see

The first “wow” will escape your lips in the lobby, which has been restored to its original, 1939 splendor, with marble panels, inlaid floors and soaring ceilings. But the nostalgia ends there—beyond the lobby lies one of the first new additions, in the form of a grand staircase, which, unexpectedly, goes down from the lobby rather than up. This is because the whole auditorium floor has been dropped 36 feet to street level. More on the later.

Moving into the auditorium itself, you’ll likely be struck first by one of two things: a second balcony where before there was only one and wood-paneled, Art Deco-style boxes lining the walls where before there were none. You might feel smaller than you remember feeling in this space before; that’s because while the floor dropped a dozen yards the ceiling stayed in the same place, and a room that once had a uniform height now sweeps upward in a dramatic diagonal from the stage to the back of the auditorium. If you’ve been holding your breath, you can let it out now.

This would be a good time to check out any of the new lobbies you haven’t yet been to—there are three to choose from, along with expanded restroom facilities (no more worrying you might not make it back from intermission in time!). Now head around the back of the auditorium to the ballroom and terrace. If the yellow-brick wall with its geometric pattern looks familiar, it’s probably because you’ve spent hours staring idly at it while sitting in traffic on the bridge formerly known as the Broadway. What used to be outside is now in, with decorative brickwork lining hallways and stairwells, uniting old and new. Pay special attention to the carved mask hovering over the stairwell; an Arkansas artist used limestone ground from the building’s original staircase to make repairs.

Finally, escape to the terrace and take in the breathtaking view of the Arkansas River from one of the state’s largest patios. While you’re there, daydream about having a second wedding, just so you can host an event in this gorgeous new space.

Much of what’s really interesting about this renovation is hiding beneath the shiny new visage. For example, you’ve probably heard about the March 2017 arrival of “Phantom of the Opera,” one of Broadway’s most popular and longest-running musicals. Ever wonder why it’s such big news? “Phantom” is among several productions that have never been staged here because Robinson, as originally designed, had nowhere near the capacity to handle a show with as many set pieces, props, costumes etc.—not to mention the 20 tractor-trailers hauling it all. Before, trucks would have to pull into the loading area (off Broadway) and equipment would have to be hydraulically lifted to stage level. How’d you like to do 20 trucks’ worth of that job—twice? Hence the 36-foot drop of the auditorium floor.

The “back of house renovations” include space both stage left and right to hold all of that equipment, as well as a walkway along the back; before, if actors needed to move from one side of the stage to the other without being seen onstage, a curtain would have to be hung along the back, cutting into the total area of the stage. Dressing rooms were only slightly more convenient. Dropping the floor also made it possible to install a complete catwalk network above the auditorium.

Speaking of technology, those catwalks are concealed behind a series of panels that fan like scales towards the back of the auditorium. Lest you think these are purely decorative (we forgive you; they’re very pretty), know that they are part of a complicated acoustical arrangement that allows the new space to serve both musical and theatrical performances, which require almost totally opposite structures for optimum sound. Between that, the catwalks, and the increased backstage capacity, we can expect performance experiences far beyond anything ever seen here before.

Opportunities to experience the new auditorium are plentiful throughout the end of the year. For a full schedule, visit Robinson Center’s Second Act. 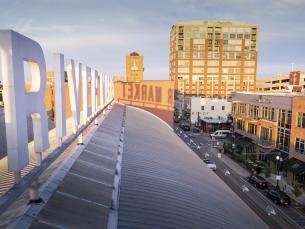 Happy birthday to the River Market!