The popular Showdown at Sunset performances have been scheduled for three dates this summer. The shows are set for June 25 , July 23 and August 27. The productions take place on the steps of the Union County Courthouse, located in downtown El Dorado in the center of Union Square at 101 N. Washington Street. 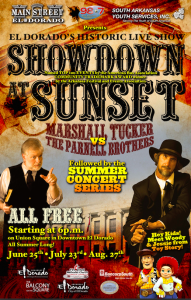 Live music and entertainment will begin at 6 p.m. with appearances by Woody & Jessie from Toy Story before the Showdown at Sunset performance starts at 6:30.

As to the production, it is a re-enactment of the Parnell-Tucker gunfight. In 1902, the Tucker-Parnell feud started over a series of disputes between the city’s marshal, Guy Tucker, and local businessman Tom Parnell. A gunfight in the city’s streets left three men dead and Tucker, (who is the great-grandfather of former Arkansas Governor Jim Guy Tucker) and others injured.  Today, historic markers located in Union Square depict information about the fight.

“This community take a tremendous amount of pride in its history and the Parnell-Tucker feud is a big part of that,” said Mark Givens, Executive Director of Main Street El Dorado. “Come early so you can shop and dine on Union Square before Showdown starts. Bring a lawn chair. We have bleachers available but a lawn chair is way more comfortable. Also, pay attention to the show. The gunshots can scare you if you’re not expecting them!”

Givens said attendees should plan on sticking around after the dust clears for the Murphy USA Summer Concert Series. “It starts right after the gunfight and this months show features new country star, William Michael Morgan,” he said.

The shows are open to the public and there is no admission fee to watch them. For more information contact Main Street El Dorado Executive Director Mark Givens at 870-862-4747 or visit mainstreeteldorado.org.