The finished designs were unveiled Nov. 3 during the annual Gala for Education by TheatreSquared Executive Director Martin Miller and Artistic Director Robert Ford. London-based theatre planners Charcoalblue joined the presentation along with New York-based Marvel Architects to present the vision.

In a press release, Miller described a significant expansion of the company’s artistic and public capacities for the assembled guests: “TheatreSquared’s new home will unite two state-of-the-art theatres, the company’s first dedicated rehearsal space right on the corner, staff offices, education and community space off the lobby, on-site design workshops, eight dedicated guest artist apartments in a separate building, outdoor public spaces at three levels, and an always-open café/bar at the active corner of West and Spring.” 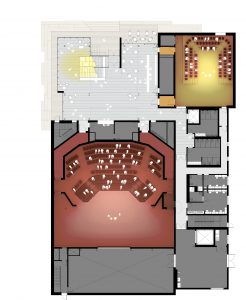 “I’m proud to say that this is one of the most intimate, yet immersive theatre spaces Charcoalblue has yet designed,” said Charcoalblue senior project manager Clem Abercrombie in the press release. “We started our design process from the inside out: with the theatre itself. Charcoalblue worked to preserve and enhance the sense of panoramic immersion in the current space, adding 100 seats to theatre’s base seating capacity while only deepening the room by the equivalent of one row. In the new theatre, in fact, the front row is even closer to the stage.”

“On my first trip to Fayetteville, I met Bob and Martin at Arsaga’s at the Depot,” said Marvel. “I asked them to tell me the most important quality they wanted to capture in their new home. They immediately said, the intimacy. Nearly before I could answer, a woman walked up and interrupted us. She said — Bob, Martin, I’ve heard you’re thinking of building a new theatre. That’s wonderful! But please, whatever you do, don’t lose the intimacy.  I got the message!”

The building’s board-form concrete theatre volumes create an acoustical envelope, isolating the performance spaces from even the blast of the Arkansas & Missouri freight train that passes through downtown Fayetteville. Both the theatres and the rehearsal space are projected from the building’s facade, emphasizing the centrality of live theatre to any passersby. Outdoor areas on each level — a patio on Spring Street, a bar terrace on West, and a rooftop terrace — underscore the organization’s ethos of transparency to the community. 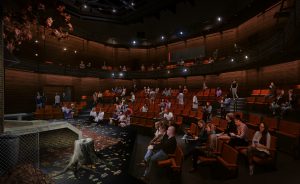 Architect Jonathan Marvel began his career under Richard Meier, working on the Getty Museum and the High Museum; today, he leads a team at New York-based Marvel Architects that has won more than 60 national and international design awards. Marvel’s designs include a new Brooklyn Public Library, the national competition-winning entry for the new Constitution Gardens on the National Mall, a master plan for Playwrights Horizons, and, in collaboration with Charcoalblue, the beautiful new home for the storied New York theatre company, St. Ann’s Warehouse. The firm has assembled a team to design TheatreSquared’s new building led by founding principal Jonathan Marvel, founding partner Lissa So, and associate Zachary Griffin.

Charcoalblue has been hailed as one the most innovative players in the international performing arts design field. As the theatre consultants and acousticians of choice for many of the world’s most renowned theatre companies, their portfolio ranges from the Royal Shakespeare Company, the Stirling Award-winning Everyman Theatre, the Donmar Warehouse, and U.S. companies Chicago Shakespeare Theater and Baltimore Center Stage. The firm is currently leading theatre design for the new, REX-designed performing arts building at the World Trade Center site.

Plans for a new home began to take form in early 2015, when the TheatreSquared Board charged a special community task force to recommend a long-term facilities plan for the company. The task force made a strong recommendation, which was then unanimously approved by the T2 Board: to launch an exploratory process toward building a new home. 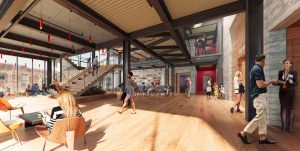 In fall 2015, TheatreSquared was selected as an inaugural participant in the Walton Family Foundation’s Northwest Arkansas Design Excellence Program. The program provides financial support to develop space for public purposes, with funds earmarked for all phases of design work. More information on the program can be found at waltonfamilyfoundation.org/design.

On June 7, 2016, the Fayetteville City Council voted unanimously to approve a 100-year lease on a 0.8 acre site at the corner of West Ave. and Spring St. in downtown Fayetteville — directly across from the theatre’s current venue in a converted warehouse at Walton Arts Center’s Nadine Baum Studios.The site is steps from dozens of restaurants and bars, blocks from the University of Arkansas campus, and across the street from a new 250-space garage. The theatre will directly connect to the Razorback Greenway, the regional bike trail linking Fayetteville, Springdale, Rogers, Bentonville, and every stop in between.

TheatreSquared has launched a detailed website with design images, backstory, and process galleries which is now public at ournextstage.org. 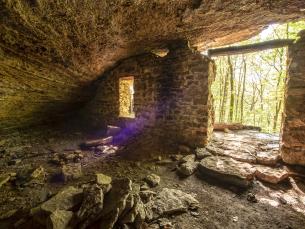