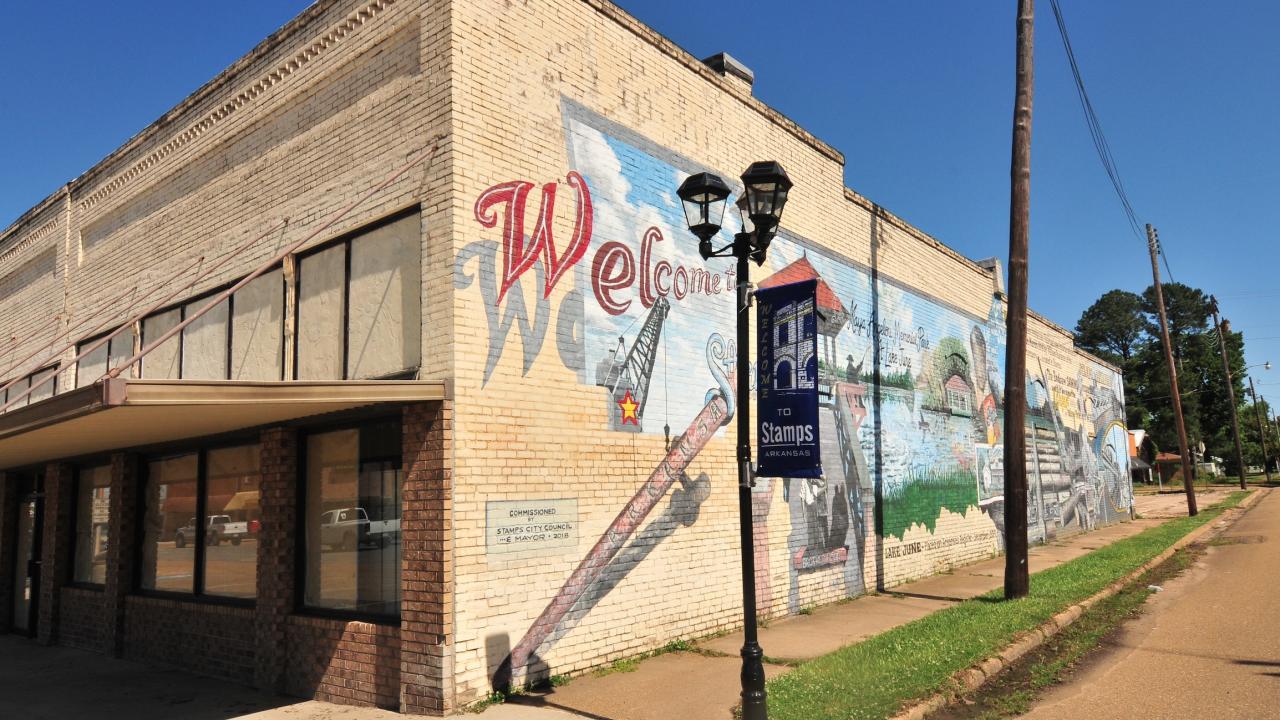 Stamps is a small town in Lafayette County around 2.5 hours from Little Rock. The town has the distinction of being the childhood home of author and poet Maya Angelou (1928-2014).  Angelou wrote about the town in her book, I Know Why the Caged Bird Sings, which received a National Book Award nomination. She spent much of her youth in Stamps in the home of her paternal grandmother, who ran the only African American general store in town. After Angelou's passing, the city dedicated a city park and Lake June to her, which you can visit in town.

When visiting the small town, a must stop is to take in the sight of the large mural that depicts the important history of the town. 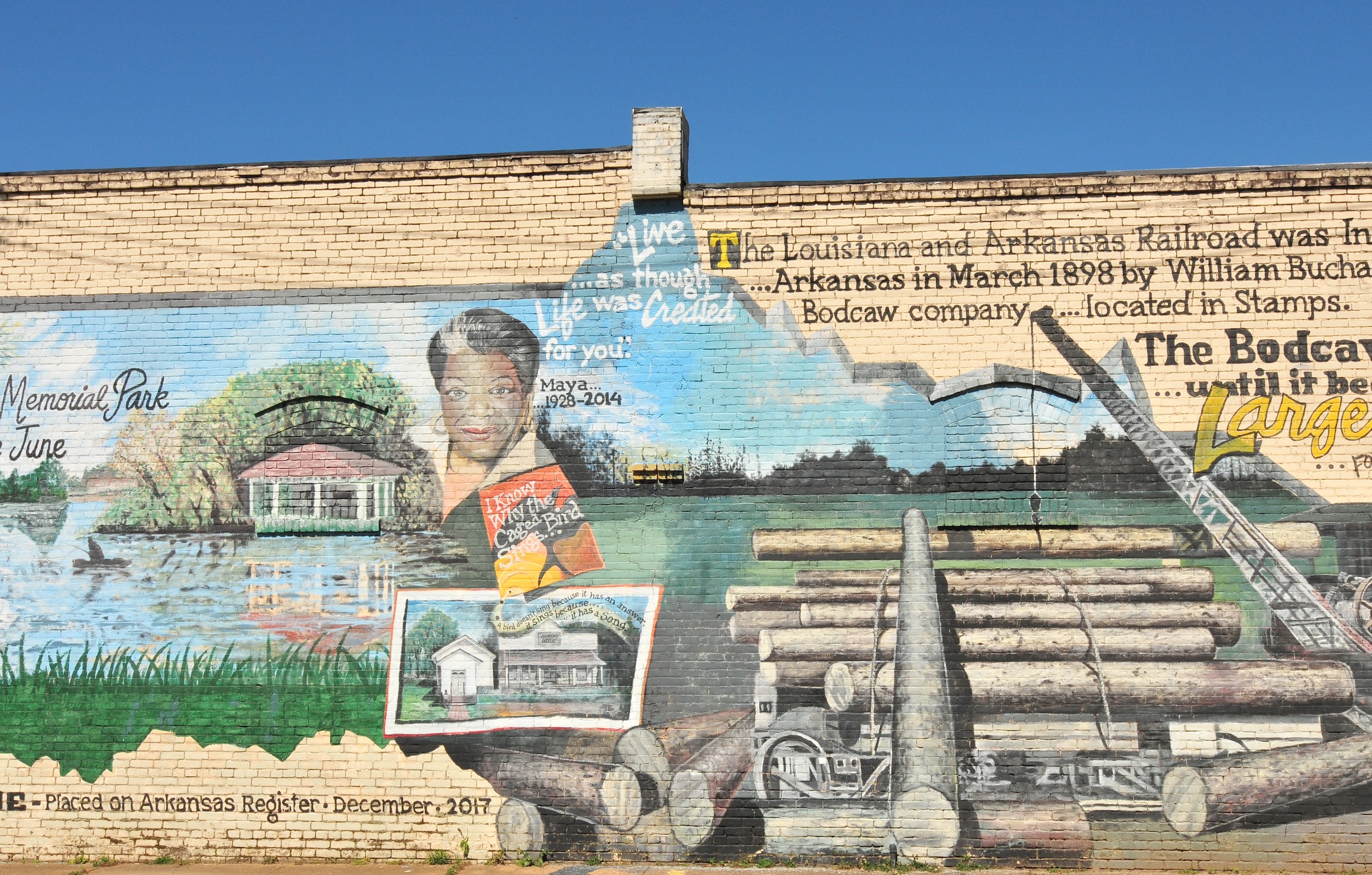 Near the mural, you can see the Gulf Oil Company Filling Station, which is on the National Register of Historic Places. The service station was built in around 1930 and was built with a Gulf Oil corporate design. You can see this station at 131 Main Street. 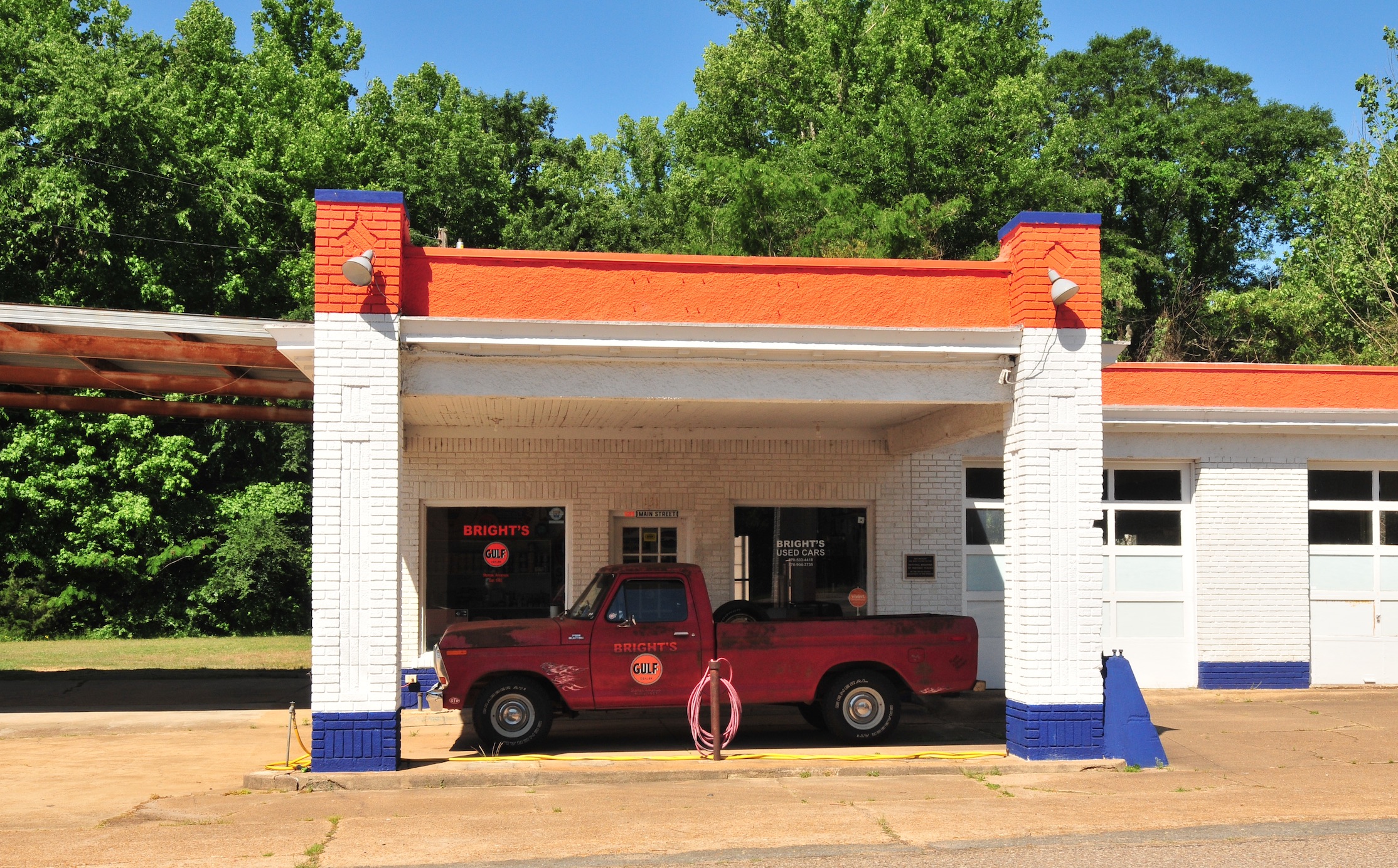 Angelou and her family went to the Brown Chapel Christian Methodist Episcopal Church in town, which is still standing and which you can see on the way to Lake June. It is pictured below. Another interesting church in town is First Presbyterian Church, which is on the National Register of Historic Places. It can be found on the southwest corner of Market and Church Streets and was built in 1905. It is designed in the Gothic-Revival style and is one of the few remaining churches in the county built during the boom of the timber industry. 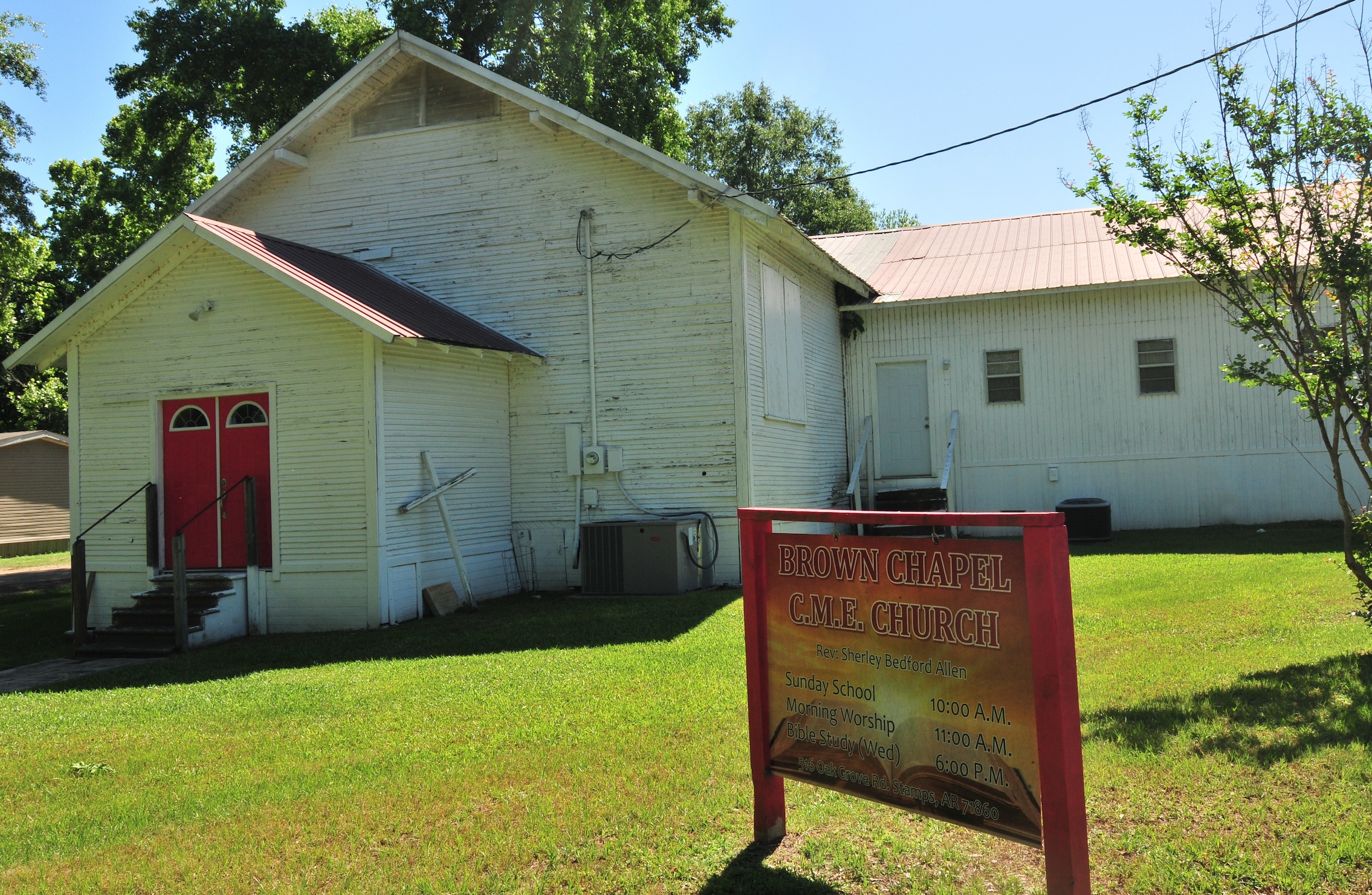 Stamps owed its early development to the lumber industry. Industry was at a peak during World War I as lumber was in great demand for ship building. However the 1930s and Great Depression signaled an end for the lumber mills. Lake June, which is on the Arkansas Register of Historic Places and is one of the oldest man-made lakes in the region, has ties to the lumber industry.

It was originally created in the late 1800s as a working mill pond of the Bodcaw Lumber facility, which has a history of once being the largest yellow pine lumber mill in the world. The Louisiana and Arkansas Railroad was incorporated in Arkansas in the late 1890s by William Buchanan, who started the Bodcaw Lumbar Company. The lake is also mentioned many times in Angelou’s  biographical novel, I Know Why the Caged Bird Sings. Shortly after her passing, the city of Stamps renamed the park at Lake June as the Dr. Maya Angelou Memorial Park. 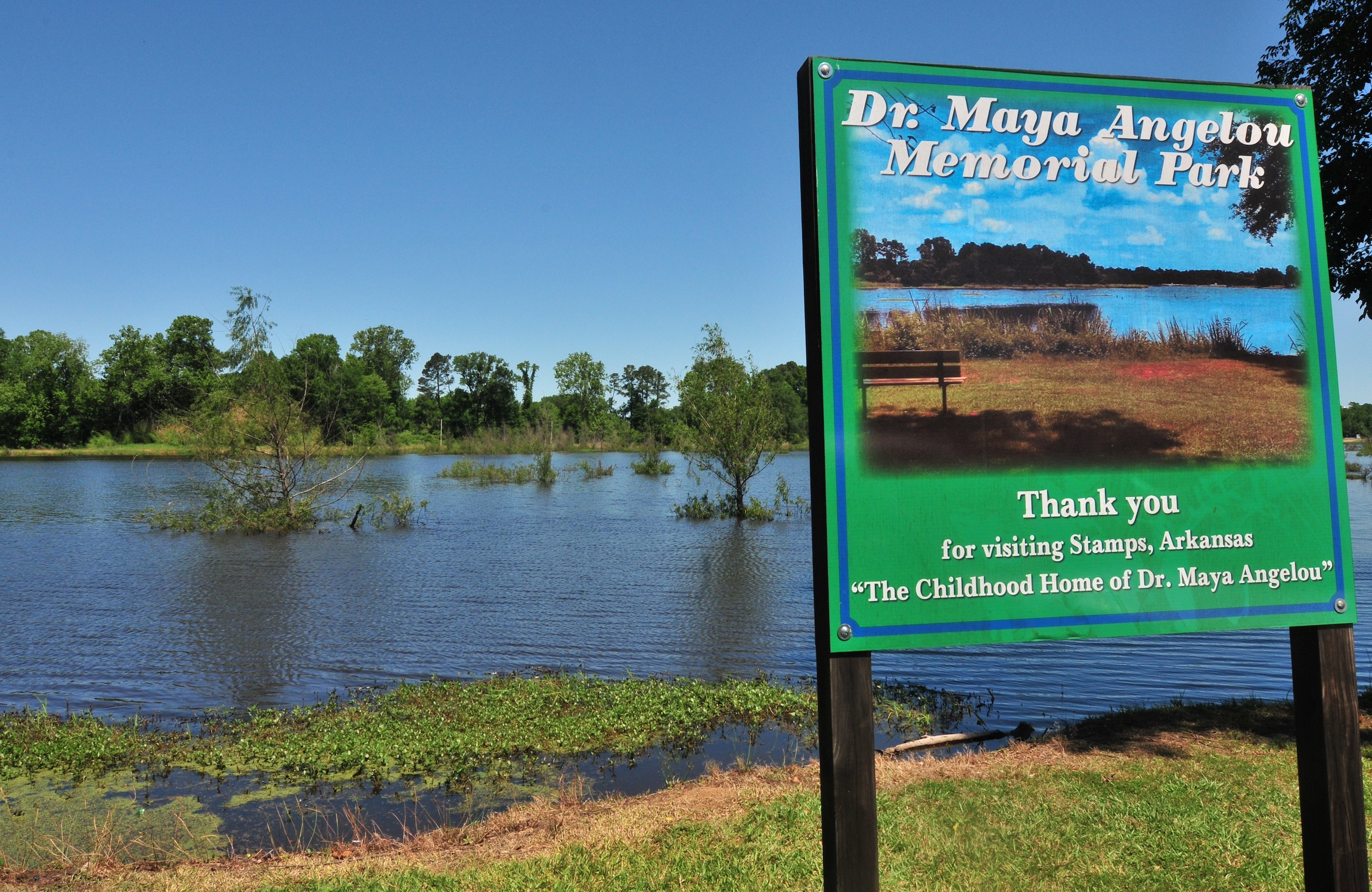 Several years after the mill closed, the lake was donated to the city of Stamps, who still own the lake but currently lease the surface rights to the Arkansas Game and Fish Commission. The lake is a very popular fishing location for residents of Stamp.  Angelou went to the Lafayette Training School while in Stamps. This building, which was a Rosenwald School, is now on the National Register of Historic Places and is near Lake June. Also next to Lake June is Lakeside Cemetery, with marked graves dating back to at least 1905. Angelou’s grandmother is buried there in an unmarked grave. 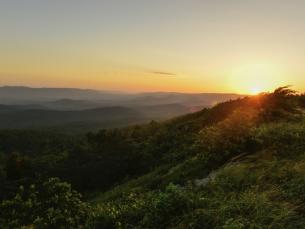 Take joy in the outdoors in Mena