The DeSoto Bluff Trail in Arkadelphia is a flat .25-mile trail that takes visitors through a natural area and ends at the famous overlook.  A view of the Ouachita River can be seen below the bluff overlook.

The bluff is named after Hernando de Soto, the Spanish explorer who led an expedition into the southern U.S. He and his soldiers were the first Europeans to set foot in what is now Arkansas. Some locals say he and his men camped on the bluff during their travels but many scholars say historical research doesn’t support this. Regardless, the bluff is named after him. However, it is known that the famous explorers George Hunter and William Dunbar made their way to the bluff in the early 1800s during their journey as part of President Thomas Jefferson’s Grand Expedition of Discovery.

Interpretive panels along the trail give details about this expedition. There are also panels that give information on local native American cultures, including the Caddo Indians, who once lived in the area. The trail was built using grants from the Arkansas Game and Fish Commission, the Arkansas Humanities Council and the Department of Arkansas Heritage. If you want to check out the view, the short trail is located at North 10th Street (U.S. Highway 7 South). 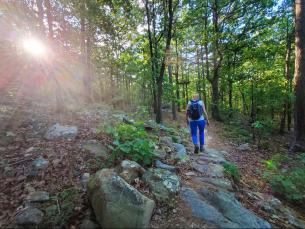