On Monday, August 21, a total solar eclipse will take place. For about three hours, the sun, moon and Earth will be aligned in such a way that the moon will pass between the sun and the Earth, temporarily blocking out some or all of the sun—depending on where you’re watching from. Arkansas is slightly south of the “path of totality,” but we’re far closer than most places, and we’ll still see a partial eclipse with up to about 90% of the sun covered. This is the first total eclipse visible to the continental United States in 38 years, and it’s been nearly a hundred since one of this magnitude was visible in Arkansas, so it’s a pretty big deal. Here’s a video from Darrell Heath from UALR and the Central Arkansas Astronomical Society explaining how it all works:

No matter where you are in Arkansas, you’ll be able to see the sun almost completely blocked by the moon—especially if you’re in the north and northeastern parts of the state, which lie closest to the path of totality and will see 95%-97% coverage. This handy-dandy chart from the Central Arkansas Astronomical Society shows when the moon will first begin to pass in front of the sun, when it will reach peak coverage, and when it will have passed the sun completely, including the total percentage of coverage at peak time: 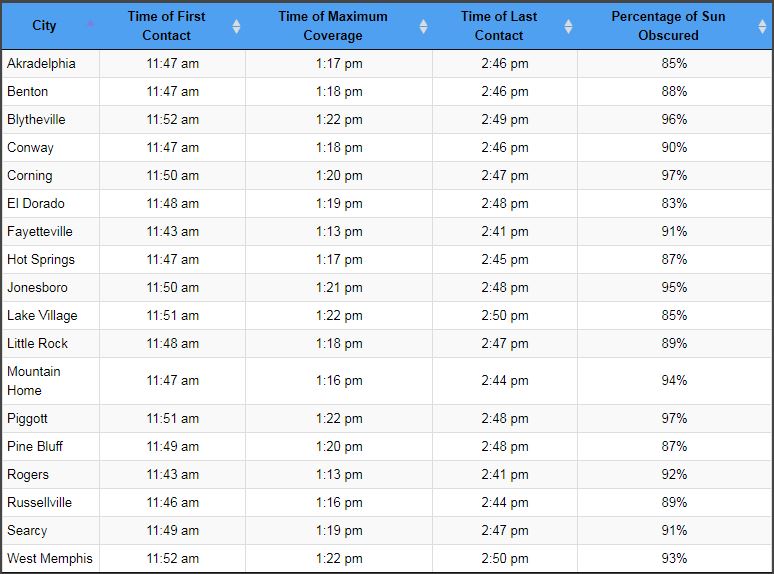 The great thing about an eclipse is that aside from a pair of eclipse glasses or other eye protection, such as #14 arc welder’s glass, you really don’t need anything to enjoy it other than a place to stand that is unobstructed by trees. And since the eclipse is occurring at midday, when the sun is directly overhead, that’s pretty easy to find. (Glasses are available at low cost online; you can also check with local schools, libraries and science museums to see if they are being offered for viewing parties.)

If you can’t get your hands on a pair of eclipse glasses, there are other ways to enjoy and have fun with the eclipse.

If you’re able to make an event of it, there are several viewing parties taking place across the state. Lake Catherine, Mississippi River, Petit Jean and  Mount Magazine state parks will host watch parties; the Mid-America Science Museum in Hot Springs has an all-day program planned, with astronomy shows, solar and lunar eclipse programming and hands-on activities surrounding the main event; the Arkansas-Oklahoma Astronomical Society will host a watch party at the Lake Fort Smith State Park marina from 10:30 a.m. to 3 p.m.; and the Museum of Discovery in Little Rock will host an “eclipnic” from 11 a.m. to 1 p.m.—bring a sack lunch, learn about eclipse science, and watch with provided glasses ($5 admission fee).

For more information about watching the eclipse in Arkansas, please visit the Central Arkansas Astronomical Society and the Arkansas SkyDome Planetarium. 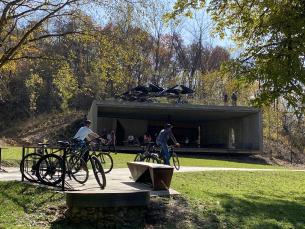