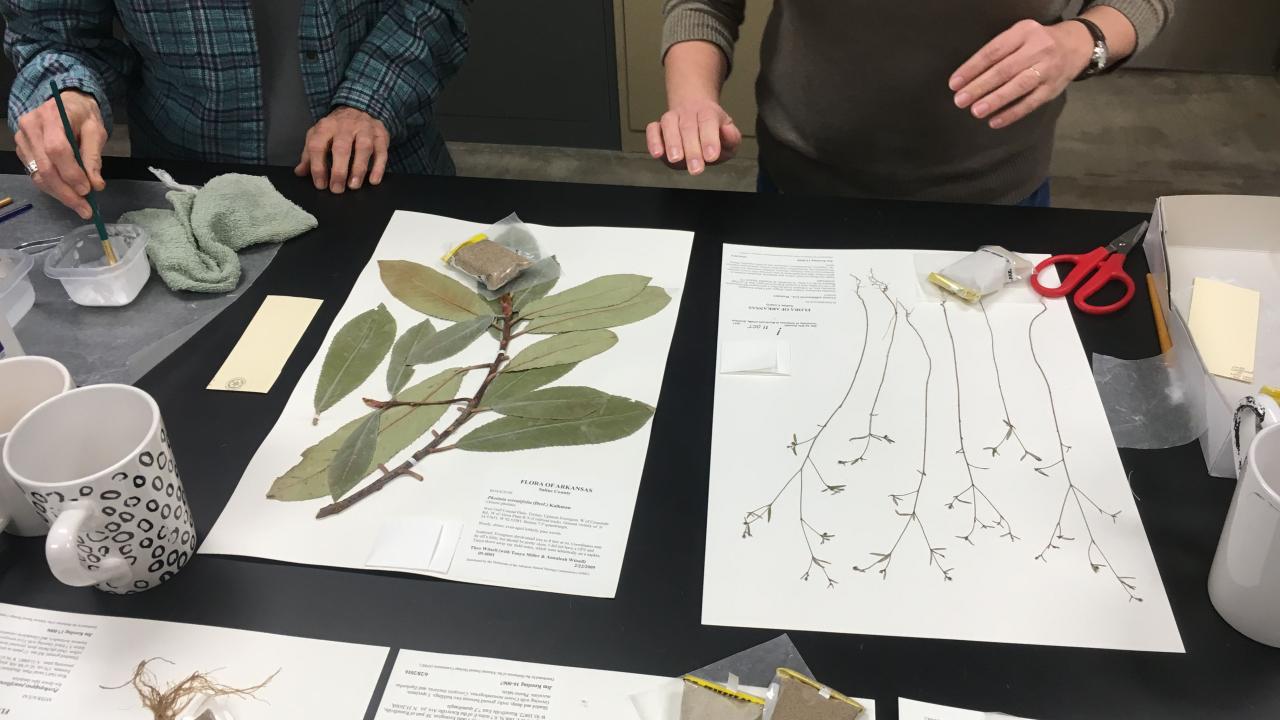 There are eight official herbaria in Arkansas, including the Arkansas Natural Heritage Commission Herbarium, ANHC, in Little Rock at the Department of Arkansas Heritage.

Herbaria, which are collections of preserved scientific plant specimens, are used as reference collections for botanists, ecologists, zoologists, anthropologists, archeologists, horticulturalists and basically anyone  interested in plants.

“These specimens serve as both a scientific and an historical record,” said Theo Witsell, who is an ecologist and chief of research and curator for the ANHC Herbarium. “Many herbarium specimens are also beautiful and the whole enterprise of collecting and preserving these specimens is a real mix of art, science, and history.”

These vital but under the radar facilities are important to have in Arkansas for a range of reasons. “Herbaria preserves a physical record of the plant life of the Earth,” said Witsell. 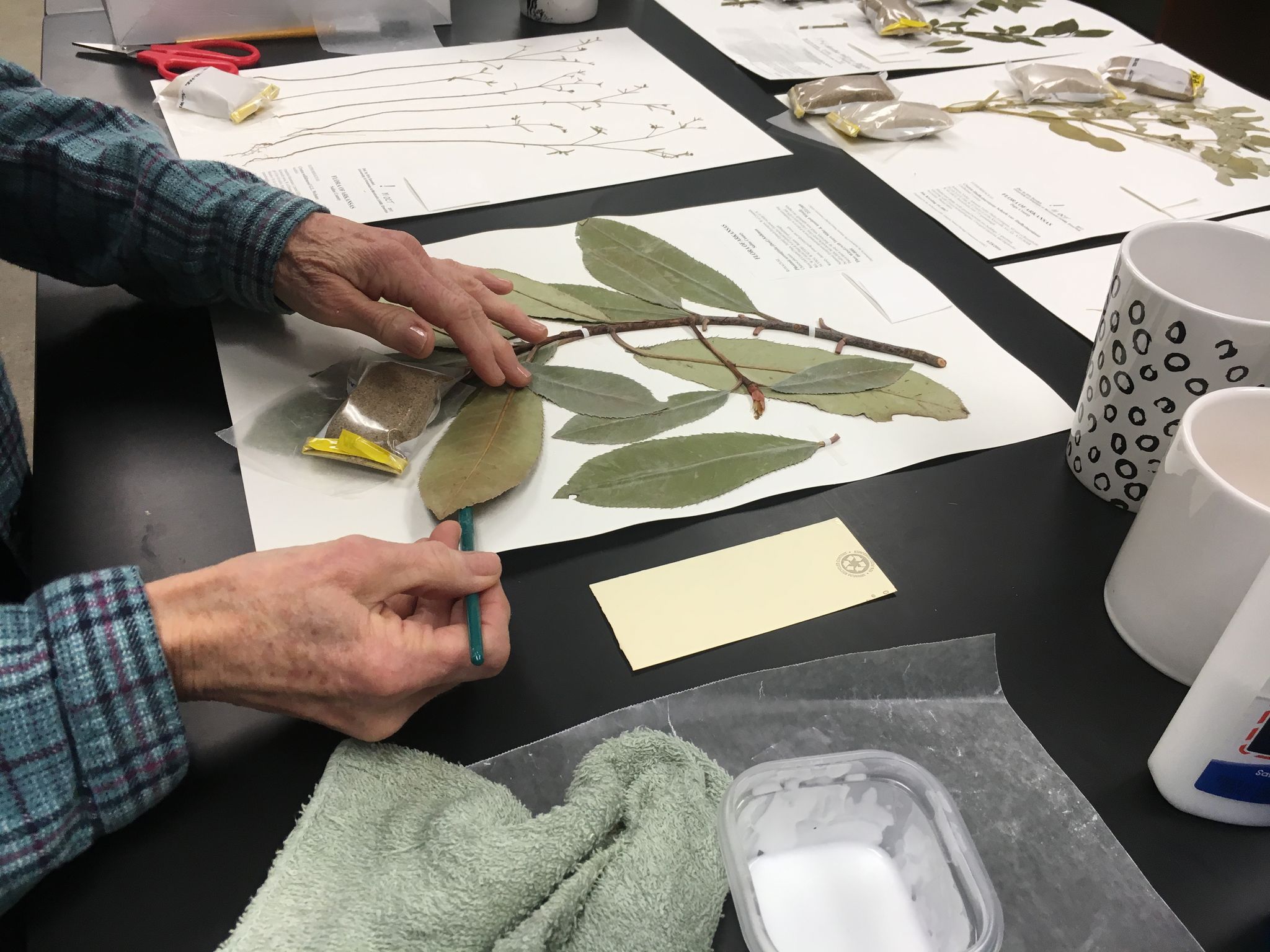 A wide range of utility also comes from the collection. “The ANHC Herbarium is used by weed scientists working to identify crop weeds, National Park Service scientists training field crews, Game and Fish Commission biologists working to identify which plants animals are eating, and archeologists looking to identify seeds or other fragments of plant material found in archeology sites,” he said. “Modern techniques in molecular genetics, DNA analysis, also allow DNA to be isolated from herbarium specimens, and these DNA sequences are used in a wide variety of research including describing new species and understanding how various species are related to one another.”

Witsell said herbarium specimens are the standard of documentation for both taxonomy, which is the naming and classification of species, and floristics, which is the occurrence and distribution of plants. 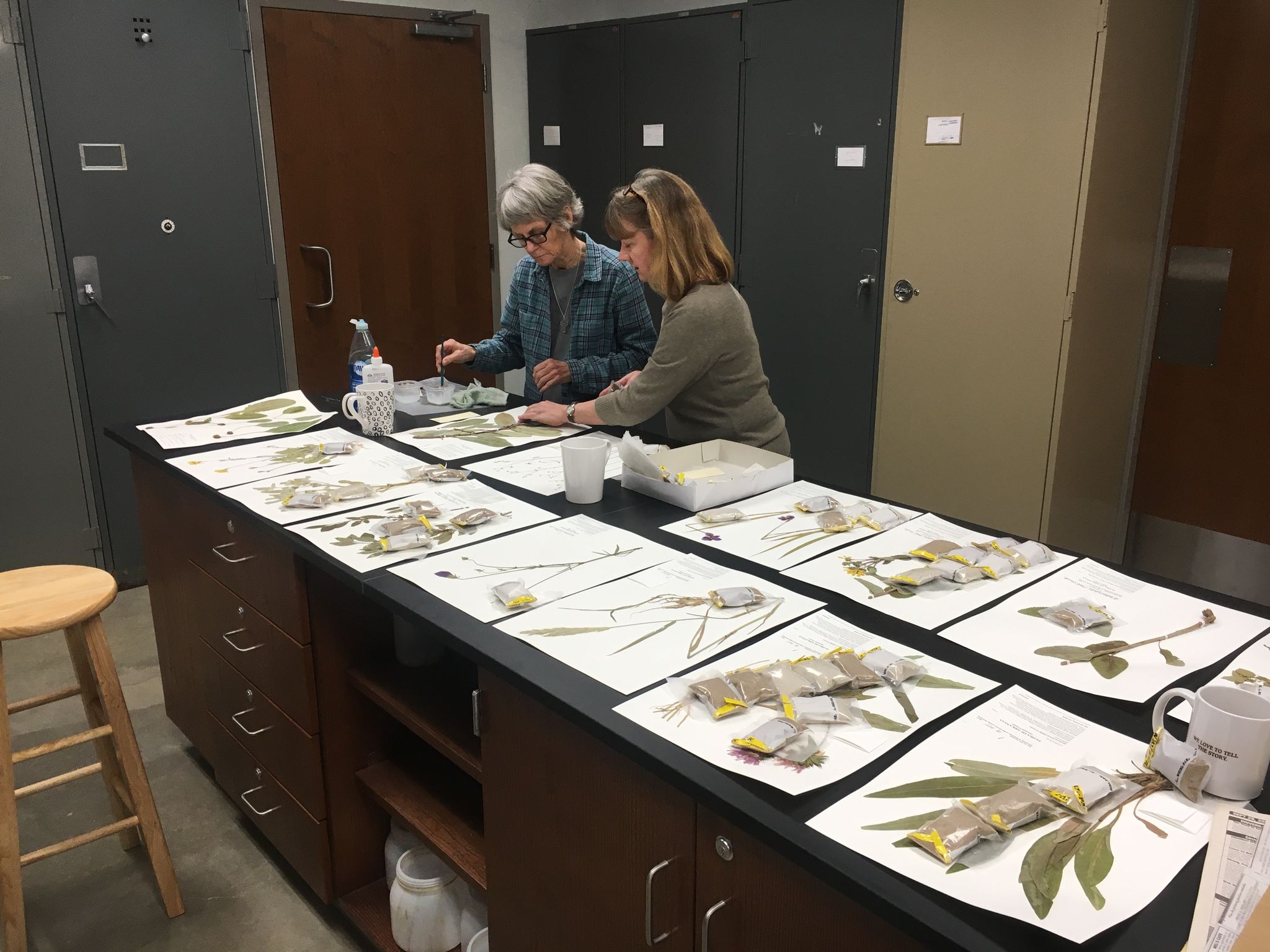 “Our collection is not the largest in the state, but is by far the most active, adding thousands of specimens per year,” said Witsell.

Currently due to the pandemic the ANHC Herbarium is closed to the public until further notice but at some point they will give tours again by appointment. Witsell noted that the herbarium is a working scientific collection, however, and isn’t really a public-facing museum with exhibits. They have, however, taken some duplicate specimens and framed them for exhibits and one group of 16 specimens is now on display in the lobby area of the Department of Arkansas Heritage.

There is also a virtual  way to see the collection via an online portal for all of the digitized specimens in the Southeastern U.S., including the ANHC collection, which can be found at the Southeast Regional Network of Expertise and Collections, SERNEC, at sernecportal.org/portal/

A few years ago, ANHC staff were involved in the publication Atlas of the Vascular Plants of Arkansas, a book of maps showing county-level range maps of all the plants known from the wild in Arkansas. Witsell said county dots on these maps are based on a specific specimen that is the designated “county voucher” for that species. So if there is ever a question about the validity of a particular record, that specimen can be located and re-examined.

“Each specimen also preserves a record of the specific moment in time when it was collected, which can provide valuable information in the future when conditions on the ground may be very different,” he said. “For example, there are some wonderful specimens from the 1870s and 1880s from grasslands in the Grand Prairie of eastern Arkansas that document species not known anywhere near that region today, now that more than 99.9% of the original grassland has been destroyed. These old specimens have let us know some species that should be included in prairie restoration projects, which we would not have known about otherwise.” 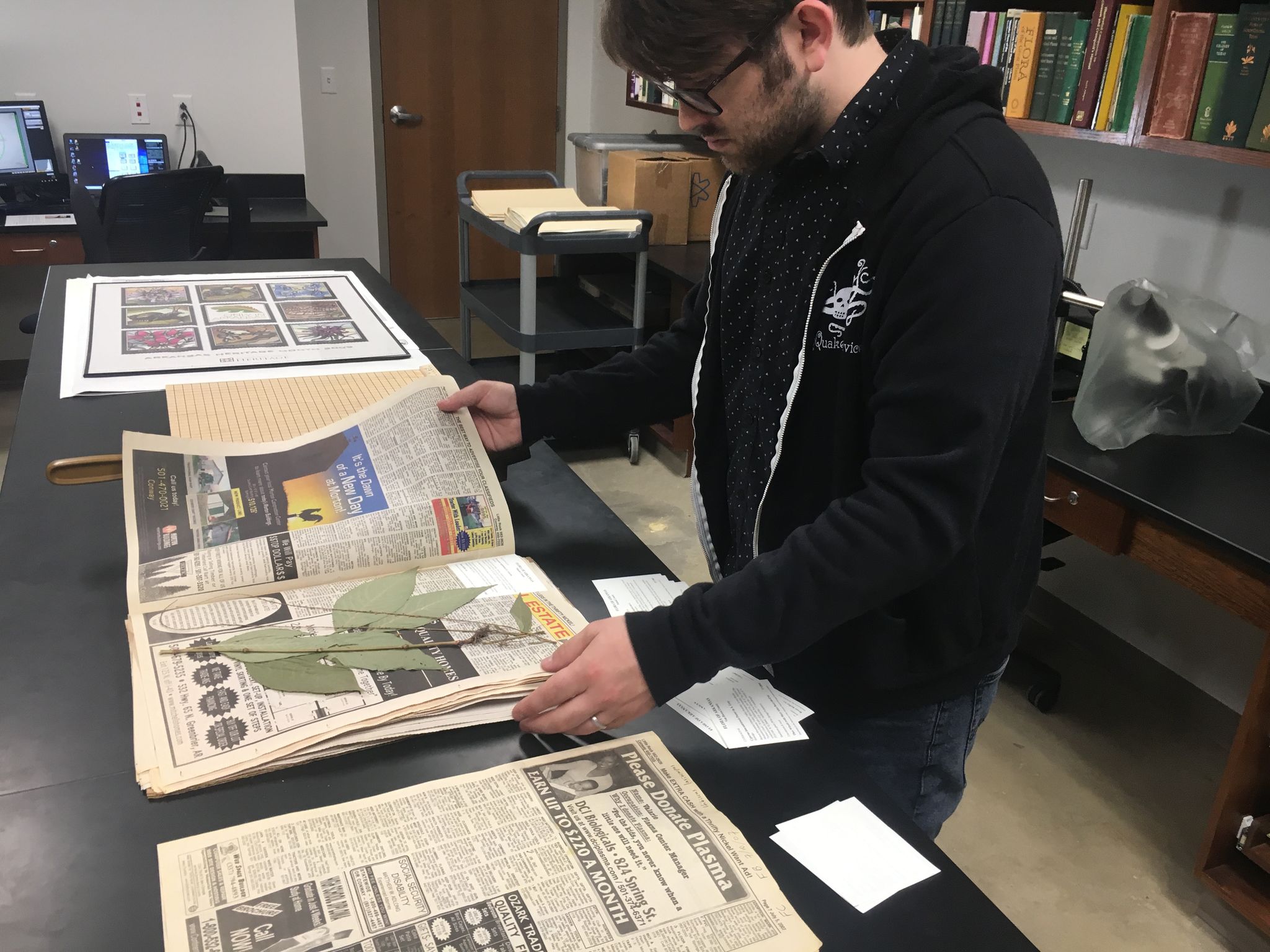 According to Witsell, there are several categories of noteworthy specimens in the ANHC collection, which is the only herbaria in the state not housed at a college or university.

The ANHC’s mission includes the identification, study, and protection of the state’s rarest species and places so the collection has a lot of specimens of rare species along with specimens from the state's rarest and/or best quality habitats.

“We have a few type specimens, which are the specimens that the formal description of new species are based on," he said. "We also have specimens documenting a number of “new state records'', the first and/or only collections of a species from the state. We also have the oldest specimens from Arkansas that are housed in the state. These were collected in 1855 by a young woman named Virginia Pryor near White Sulphur Springs in Jefferson County, and we have these as part of an agreement with the Arkansas State Archives. These specimens are part of a bound herbarium, like a large book, that was donated to the Arkansas State Archives last year, but are housed at ANHC.”

Witsell noted that there are older specimens from Arkansas, the earliest collected in 1819 by Thomas Nuttall, but that these are all housed in herbaria outside of Arkansas. 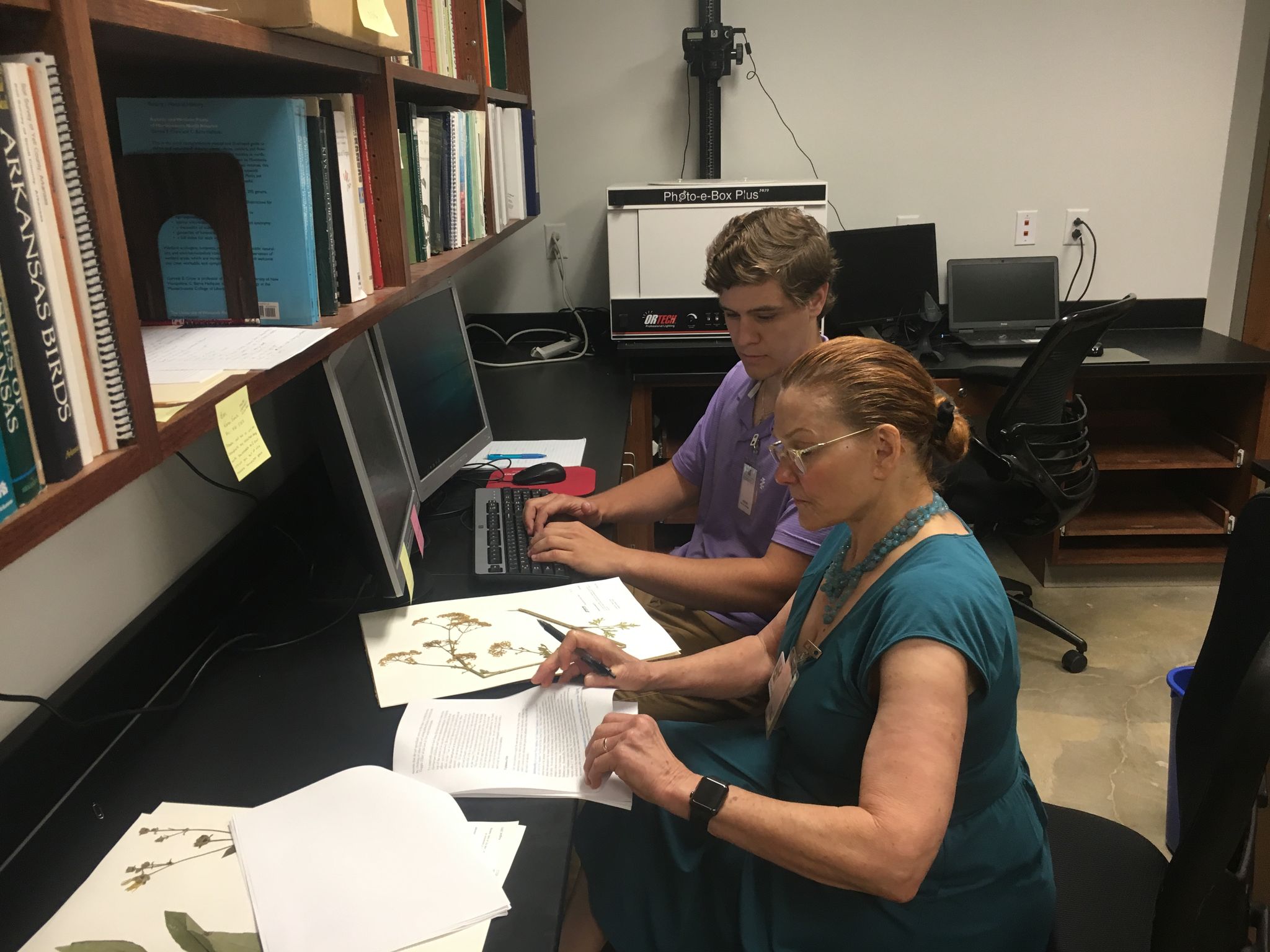 Witsell is the reins behind the ANHC Herbarium and decided to start it back in 2003 when he became aware that the only local herbarium at the time, the University of Arkansas at Little Rock, UALR, was not getting the resources it needed.

“This is an unfortunate trend particularly in herbaria housed at academic institutions, across the world, and many are being shut down, and in some cases thrown away,” he said. “Having a good reference collection is essential to our work, and going all the way to the U of A Fayetteville, the largest collection in the state, every time we needed to use a collection was not feasible. Starting our own herbarium proved to be a good decision, as the UALR collection was closed down a few years later."

Witsell said unfortunately many administrators view herbaria merely as entities that take up a lot of space and don’t bring in a lot of money, and as a result many are under-staffed, under-funded, and under-valued.

"That is not the case for ANHC," he said. "When we moved to the new Department of Arkansas Heritage headquarters a few years ago we got a state-of-the-art facility with a lab, imaging room, and special collections room with specialized compactor shelving and a separate climate control system allowing us to store the collection at optimal temperature and humidity, cool and dry. We are very fortunate for the support we have received from both the Department and the Arkansas Natural and Cultural Resources Council, which funded a lot of our equipment. In fact, our capacity, enough to house around 250,000 specimens, would allow us to absorb any of the remaining in-state collections if they should be shut down in the future.” 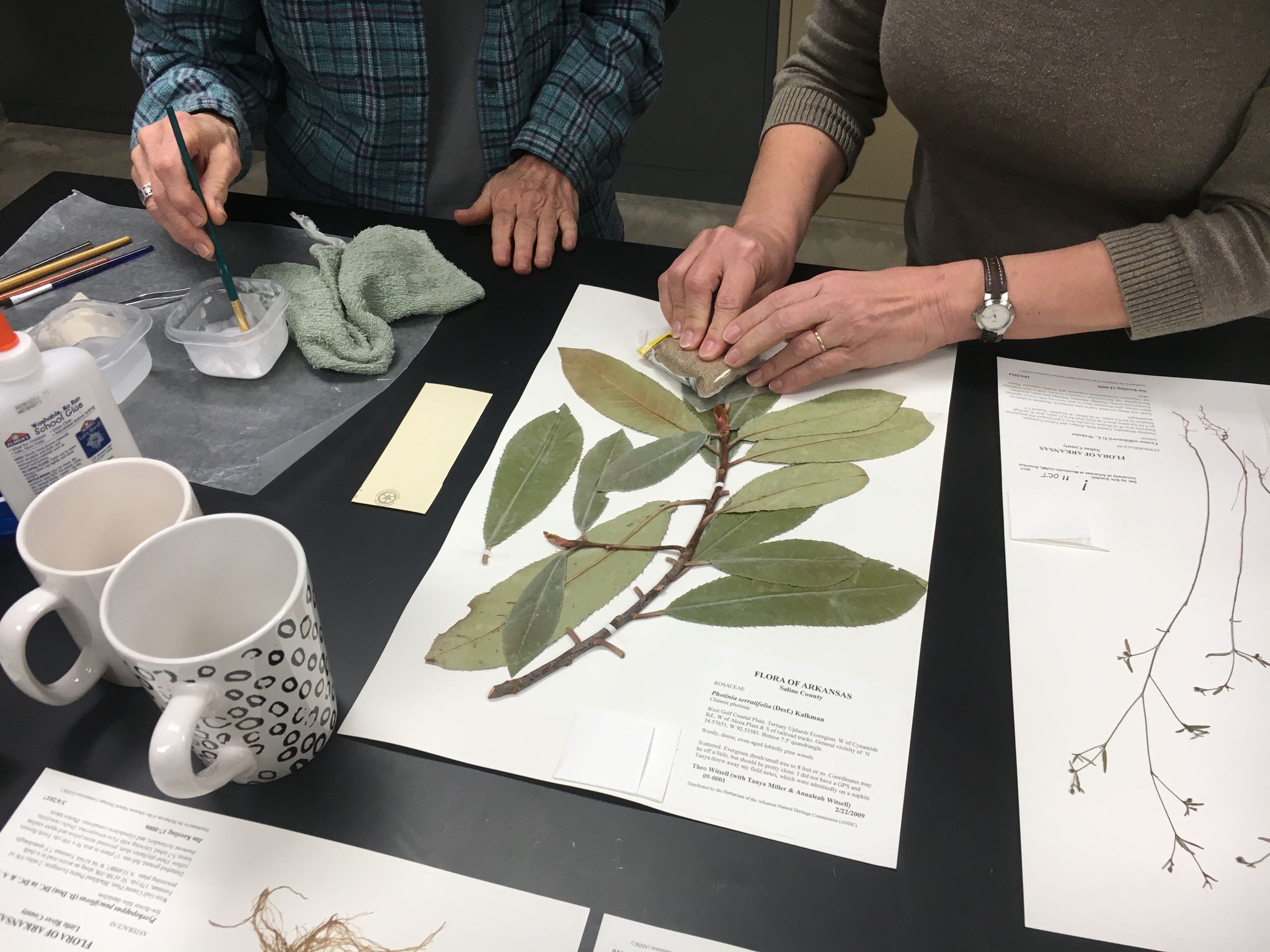 As for the nuts and bolts of what occurs in an herbarium, Witsell said each specimen is pressed and dried and attached to a sheet of archival paper with a label containing information on where and when it was collected, who collected it, and information such as the habitat and population. These are then filed in folders by established scientific classification categories so that everything can be easily located.

In order to be an official herbarium a collection must be registered with Index Herbariorum, a listing of scientific collections maintained by the New York Botanical Garden.

Volunteers play a massive role in digitization efforts, as well as the processing of the specimens so that they can be included into collections.

Witsell emphasized the value that trained volunteers bring to the ANHC Herbarium. “We couldn’t do it without them,” he said. ANHC staff train volunteers in tasks like mounting, imaging, databasing the label data so that specimens can be searched for in the SERNEC portal, and georeferencing. Witsell said they are still recovering from the pandemic as far as getting volunteers back to work, since they can’t come into the Herbarium for the time being, but they hope to have some opportunities later in the year. In the meantime, those interested in volunteering can reach out to them through the ANHC website at arkansasheritage.com/arkansas-natural-heritage/support-us/volunteer. 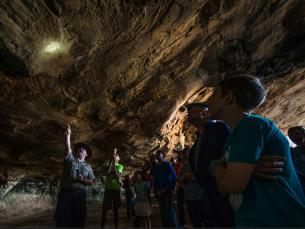