For over three decades, October has meant music in the Arkansas Delta thanks to the award-winning, world-renowned King Biscuit Blues Festival. But the real beginning of “KBBF season” begins with the unveiling of the festival’s official poster each year.

The winning poster will be unveiled on Thursday, Aug. 10, at a special reception at 5:30 p.m. The reception is free and open to the public and will be held at Southern Bancorp, located at 425 Plaza St., in Helena-West Helena. Posters will be available for purchase at the event and the winning artist will be on-hand to sign their artwork.

This year’s King Biscuit Blues Festival, slated for Oct. 4-7, promises to be one of the best yet.

This year’s headliners are all first-time performers at the quintessential festival. Thursday night’s headliner is Louisiana’s own Tab Benoit, known not only as an acclaimed bluesman but also as a dedicated conservation advocate. Friday, Oct. 6, brings JJ Grey & Mofro to the festival’s main stage, along with the 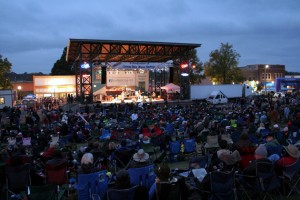 For more information on the KBBF poster unveiling or this year’s festival, visit KingBiscuitFestival.com or call 870-572-5223.