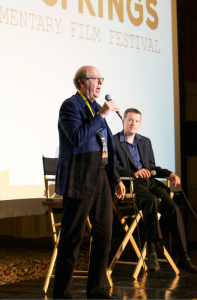 The 25th annual Hot Springs Documentary Film Festival is October 7-16 in Hot Springs. The event is the longest running documentary film festival in North America and is an Academy Award qualifier in the Documentary Short Subject category.

The Arlington Hotel, which is the largest hotel in Arkansas, serves as the main venue of the festival with some screenings and events taking place at other venues around town as well. The festival director is Courtney Pledger and along with the films, a highlight of the festival is the special guests, actors, and directors that travel to the festival for the screenings. Overall, there are around 100 films that are shown at the festival and they range from feature length to short form documentaries.

Along with films, there are events and parties that take place throughout the 10-day cinematic celebration. I’ve had the chance to attend the festival over the past few years and it has been a memorable venture each time out. It is evident that a lot of work and care goes into putting on an event of this caliber and a chance to share the festival experience with others who also love the art form is a special occurrence. This year, actor Louis Gossett, Jr. and actor Beau Bridges will serve as honorary co-chairs of the festival.  Both will attend the opening night festivities on October 7.

Actor Ed Asner is set to be on site for the closing festivities on October 15. He will be on hand for a Q&A session following the showing of the documentary My Friend Ed. Asner is well known for his role as Lou Grant on the Mary Tyler Moore Show. The closing-night party is set to be at Mountain Valley Spring Water’s headquarters on Central Avenue.  Announcements of  further screenings, special events and celebrity guests will be unveiled by the festival crew as well.

Visitors to the festival are also surrounded by the vibrancy of Hot Springs and Hot Springs National Park. This national park protects naturally flowing thermal springs and has the distinction of being the first federally protected area in the nation. It is surrounded by the Ouachita National Forest and houses Bathhouse Row with it’s eight historic bathhouses, two that tap into the area’s natural hot springs. The Superior Bathhouse Brewery and Distillery there has the title of being the first brewery to be located inside a national park. 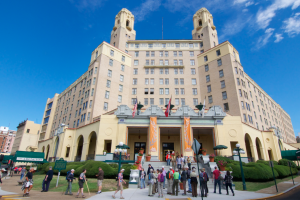 Former U.S. President Bill Clinton was raised in Hot Springs and his childhood home there is just blocks from schools he attended and his favorite hangouts. The city is also home to Oaklawn Racing & Gaming, Arkansas’s only Thoroughbred racing venue and one of the top tracks in the nation. Along with this attraction, the town has a 210-acre botanical garden, a theme and waterpark, a thriving arts community, shopping and antiquing, the Gangster Museum of America, the Mid-America Science Museum, the Hot Springs Historic Baseball Trail, lakes that accommodate water-based recreation, private resorts and state parks, and annual festivals such as the Hot Springs Documentary Film Festival.

As to how the festival came to be, according to the festival website, “in the early 1990s, a visitor to Hot Springs named Sy Gomberg became enamored with the city he found during his trip. Gomberg, who was at the time head of the Documentary Branch of the Academy of Motion Picture Arts and Sciences, helped cement an idea from the Hot Springs and Little Rock arts communities that with the determination and hard work of many locals, soon became a reality: The Hot Springs Documentary Film Festival. Now, 25 years later, HSDFF is a qualifying festival for filmmakers vying to win the Oscar for Best Documentary Short Subject. The festival is one of 38 such qualifiers among thousands of film festivals.”

For more information, visit them on Facebook. You can also purchase passes and tickets at hsdfi.org.