Leachville is in Mississippi County, 30 miles east of Jonesboro in Craighead County, and is on the Buffalo Island Loop off the Great River Road National Scenic Byway. It is one of five towns that collectively make up the area known as Buffalo Island. Local lore has it that floodwaters once stranded a herd of buffalo on an “island” now occupied by Leachville, Black Oak, Caraway, Manila, and Monette. At one time Leachville’s slogan was “The Cleanest Town on Buffalo Island, Where Agriculture and Industry Meet.” Established about 1896, the town was not incorporated until 1916. It was named in honor of one of the town’s founders and successful businessmen, Joshua Gilbert Leach.

Railroads came to Leachville in 1899, and for many years thereafter, shipping raw materials out of the area was the leading industry. After rail shipping declined, the Brown Shoe Company built a factory in Leachville in 1956, employing more than 500 residents at its peak. Its closing in 1983 devastated the town’s economy, from which it has never fully recovered.

As in many small towns in Arkansas, cotton is an important crop. In 1992, the Adams Land Company cotton gin was built at the north end of town as the largest cotton gin in Arkansas. The Adams Estate on State Highway 77, built by the gin’s owners, is now the corporate headquarters for the gin. Its magnificent ponds, sculptures, and gardens make it a popular place to schedule a special event. The Melody Theatre also can be rented for special events.  It showed movies until 1978, and residents can now enjoy live music in the historic building, including gospel, country, and rock, and other shows. 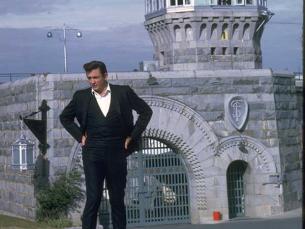