The City of Dardanelle is framed by the Arkansas River and the peaks of the Ouachita Mountain range, making fishing, birding, water sports, camping, bicycling and hunting prime activities of the region. Three main attractions for outdoor lovers are a mountaintop park, lake side park and wildlife refuge.

Mount Nebo, one of Arkansas's first state parks, offers cabins, camping and hiking trails with sweeping views of the Arkansas River Valley. Native stone and logs were used by the Civilian Conservation Corps to construct many of the park's bridges, trails, cabins and pavilions. The park offers 35 campsites, 14 fully-equipped mountaintop cabins with kitchens, miles of trails, hang gliding launch sites, and opportunities to enjoy beautiful sunsets and star gazing.

Lake Dardanelle is a sprawling 34,300-acre reservoir on the Arkansas River. These two water resources combined put this area into the national spotlight as a major bass fishing tournament site. Lake Dardanelle State Park offers two areas on the lake: one park site is at Russellville, and the other is located at Dardanelle.

Holla Bend National Wildlife Refuge is located six miles south of Dardanelle, just off of Ark. 155 east. Established in 1957, the refuge is 7,057 acres spanning through Pope and Yell counties. It lies along the Arkansas River and is bounded by an oxbow lake that was created when the Army corps of Engineers cut a channel through the bend in the river to promote navigation and flood control. The refuge protects bottomland hardwoods and wetlands and provides habitat for wintering waterfowl, bald and golden eagles and migratory song birds.

Other nearby points of interest include, Petit Jean State Park and Mt. Magazine State Park.

Some of the cities general attractions mark history. Council Oak Park contains a massive 400-to-500-year-old white oak tree where the April 1820 Treaty of Council Oaks between Gov. Robert Crittenden and Black Fox of the Cherokee Nation was signed, giving land south of the Arkansas River to the Arkansas Territory. Stagecoaches on the Butterfield Overland Mail Company route were ferried across the Arkansas River at Dardanelle. This passage is now part of the Arkansas Heritage Trails System. Dardanelle Rock is a legendary rock formation that rises near the Arkansas River bank and was used as a lookout point by Native Americans and later by Confederate soldiers. A roadside park is located below it.

One of the oldest cities in the state, Dardanelle officially incorporated in 1855. First established as a river town in the mid-1800s along the banks of the Arkansas River, Dardanelle was one of the state's leading towns in the 19th Century. It was a hub of transportation for hundreds of barges, boats and other vessels traveling between the state's two largest cities of Little Rock and Fort Smith. It is one of two county seats for Yell County; the other is Danville.

While Dardanelle is no longer one of Arkansas's largest cities, it still plays a prominent role in state affairs. The Port of Dardanelle is one of the busiest in the state. The Dardanelle Lock & Dam, constructed in the 1960s as a part of the McClellan-Kerr Navigation System, led to the formation of Lake Dardanelle and helps regulate river traffic on the Arkansas River. Highways 7, 22, 27, and 28 can be found ending or going through Dardanelle. Dardanelle is halfway between the Buffalo River to the north and Hot Springs to the south on Scenic Byway 7. Several notable citizens include attorney Marcellus Davis, U.S. consul to Trinidad and the Yucatan during the late 19th century; professional golfer John Daly; and comedian Carol Burnett, who spent childhood summers with her grandmother in Belleville. The county was also featured in Charles Portis' novel “True Grit,” with the heroine, Mattie Ross, hailing from “Yell County near Dardanelle.” 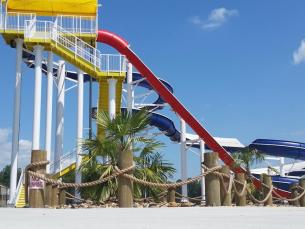 Beat the heat in the Lower Delta

The Spa Town of Eureka Springs